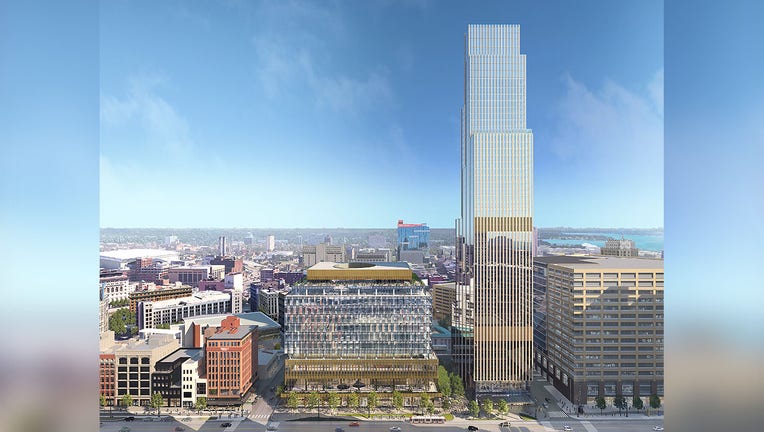 DETROIT (FOX 2) - 24 years ago, the Hudson's building was imploded in downtown Detroit and the smoke and debris famous enveloped FOX 2's Huel Perkins and Monica Gayle. Five years ago, Bedrock announced plans for the vacant lot. Now, we're getting new renderings of what the inside of the new tower will look like.

On Thursday, Bedrock unveiled the first photos of renderings of the development of the site, which will stand at 685 feet by the time construction is finished, making it the second-tallest building the city.

The 1.5 million square foot building will have mixed use development and "promises to serve as a landmark destination", Bedrock says.

"The significance of this development goes beyond its unique and distinctive physical presence. Once complete, along with impressive views, the project will bring premier office, residential, hotel and event spaces with carefully curated dining and entertainment experiences," said Kofi Bonner, CEO of Bedrock. "But more importantly, the project will anchor the transformation of the historic Woodward corridor and exemplifies the resurgence of Detroit. The reinvigoration of Detroit’s most centrally located site will become a must-see location and will generate fond memories for Detroiters and visitors for generations to come."

What to expect at the new site

As of May 12, construction has reached 200 feet, not even a third of its way to 685 feet, but it will have a distinctive role in the future of the Detroit skyline.

Starting on the ground floor, the building will have retail and ‘experience’ spaces along Woodward and Grand River.

The mixed-use building will have public spaces throughout, venues on the second and third floors of the building, and more. Events in these spaces can hold between 50 and 2,500 people.

The unique structure will have both an office building and the tower, which will reach the nearly 700 feet when construction is completed in 2023. Between the two will be a plaza with outdoor space for anyone to enjoy, Bedrock says.

At the top of the structure will be rooftop restaurant opportunities and, of course, breathtaking views of the city skyline.

When will construction be finished?

Construction started in 2017 with the groundbreaking ceremony. Since then, 130-foot caissons were drilled to support the foundation and more than 10,200 tons of steel and 11,600 beams were used to create structural support.

Since March 2021, the building has been steadily growing up and the office building topped out at 220 feet. Structural work on the tower is still underway and will reach its final oheightf 685 in 2023, making it the second-tallest building in Detroit and Michigan.

The development is expected to be finished by 2024.