SOUTHGATE, Mich. (FOX 2) - Whoever did it, cut the locks to steal a brand-new trailer for the children's marching band

"I've been thinking about what drives somebody to do this. On of our philosophies is we create better people first and better performers second," said Zack Novicki, Southgate band director. "I couldn't help but wonder maybe this person didn't have that opportunity as a kid - and who does this?"

The trailer had two tarps custom made flat bed carts and props inside. When you add it up, everything was valued at about $10,000.

Southgate Band Boosters had their brand new 2021 trailer stolen from the District's Bus lot on Burns and North Line around 2:45 a.m. Wednesday. It was so new they had to display a stock photo because they don't have any photos taken of it yet.

The trailer had two tarps custom made flatbed carts and props inside. When you add it up, everything was valued at about $10,000. The trailer is a Black Cargo Express XL SE Flat top v-nose car hauler, 8.5 by 20 feet.

The group is offering $200 for information leading to the trailer and $100 for the missing tarps. Security cameras were working at the time but haven't helped investigators get the stolen stuff back.

The group, which said it does 99 percent of their own fundraising, has also started a GoFundMe me to maybe raise the money to buy a new one.

Wyandotte Music Boosters is in a similar situation and they too had a vehicle stolen. That flatbed trailer was nabbed about a week and a half ago, and in this case, too, the surveillance video wasn't much help. So reach out to Wyandotte police if you know anything about this trailer.

Southgate police have requested additional video from Ring cameras and added that viewers should watch out for a used 2021 trailer for sale. If the price seems too good to be true, it just might be. 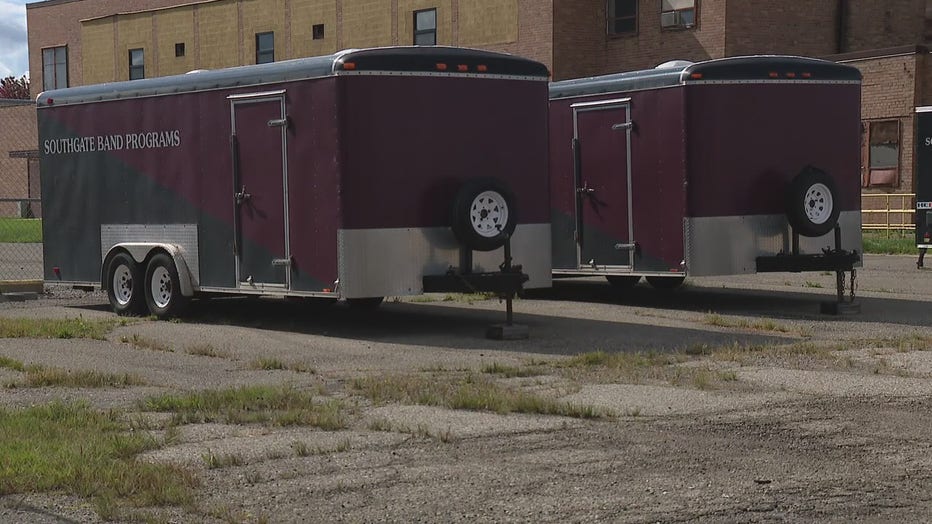