North Dakota fugitive chased down and caught in Warren

WARREN, Mich. (FOX 2) - The hunt for fugitive Kamauri Kennedy started in North Dakota and ended with a police chase - and arrest - in Warren.

The view from the SkyFOX helicopter shows the manpower it took to arrest Kennedy. He was pulled by police from a gray van taken into custody. But the hunt for Kennedy has been going on for months.

"We’ve been looking for this fugitive since June of 2021," said Deputy Aaron Garcia, US Marshall's Office.

On June 3, Kennedy allegedly killed his girlfriend more than 1,000 miles away in Minot, North Dakota.

"He shot the female, his girlfriend, in the head. took her body and put it in the trunk," Garcia said.

Police say he attempted to cover up his tracks by burning the car and their house.

"Right after all of this occurred, Kamauri Kennedy disappeared from Minot and we couldn’t find him," said Minot Police Chief John Klug.

This began the cross-country manhunt that ended at Groesbeck and Eight Mile in Warren. US Marshalls say they first found him in Detroit, where Kennedy does have ties - and a criminal past.

"At the end of the day, he has a homicide warrant, and multiple other felony warrants, and a violent criminal history," Garcia said. "He needed to go to jail."

But as law enforcement moved in, he fled.

"Kennedy takes off at a high rate of speed. this guy is wanted for murder and violent crimes so the pursuit ensued," Garcia said.

Macomb County Deputies and other agencies got involved, running him off the road and into custody. A deputy and a Marshall were slightly injured in the whole process.

"His hand had just minor injuries (and)  one of the marshall deputies was also treated as a precaution," Garcia said.

It was no small effort to track him down and make the arrest, Garcia said. 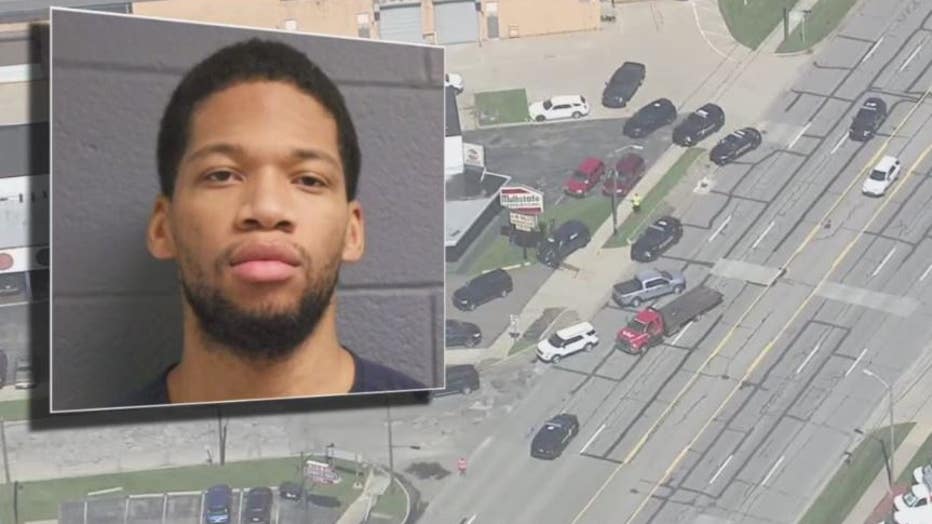 "It’s all about holding people accountable," Klug said. "And now we turn it over to the court and we let them figure it out and the citizens figure it out, if this is somebody that committed this crime."

Kennedy will likely appear in federal court in Detroit as soon as tomorrow for being a two-time parole absconder, then the process begins to extradite him to North Dakota, to face the murder and arson charges.