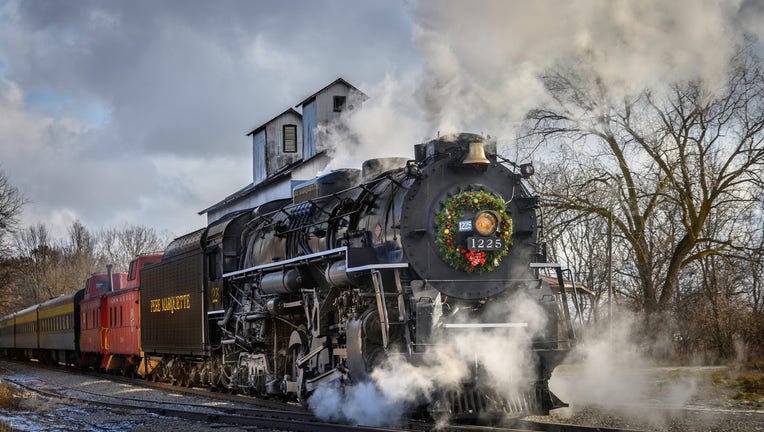 OWOSSO, Mich. (FOX 2) - The 2022 North Pole Express will run as this fall and winter but it won't be with the nostalgic steam-powered Pere Marquette 1225. Instead, this year's version will be pulled by a diesel engine.

In a press release from the Steam Railroading Institute, the Pere Marquette 1225's running gear is in need of a major rebuild - the gear has to be completely inspected, refurbished, and replaced- something that hasn't been done since the 1940s.

Unfortunately, the components will not be ready in time for the 2022 season, which means the North Pole Express trips won't be powered by the traditional steam engine. The SRI said it explored other steam options to give that traditional feel to the experience but it just wasn't feasible.

The SRI acknowledged that this is disappointing but the work is necessary to ensure the original engine is in operating condition for the future.

The good news is that everything else about the experience will be the same. Plus the SRI said the Piere Marquette will be on a display track near the visitor's center in Owosso for pictures before or after the train.

What is the North Pole Express?

The North Pole Express has been an annual tradition run by the non-profit SRI since 2004 and grows in popularity every year. The engine is the world-famous Pere Marquette 1225, a 1941 Berkshire-type steam locomotive that is the pride and joy of the SRI collection.

The locomotive was built in 1941 by the Lima Locomotive Works for the Pere Marquette Railroad but was retired and donated to Michigan State University in 1957 for display as an outdoor artifact.

In 1969, a group of students started restoration on the engine to get it back to operation. In 1983, it was moved to Owosso and in 1988 restoration work was finally complete.

It's perhaps best known for its role in the 2004 Christmas classic "The Polar Express" as its blueprints and sounds were used as the prototype for the locomotive in the movie.

When will the North Pole Express run?

Rides are usually at 10 a.m. and 5 p.m. on Saturdays and Sundays plus two rides on the day after Thanksgiving.

When do tickets for the North Pole Express go on sale?

Tickets for the 2022 North Pole Express have not yet gone on sale. The SRI sold tickets last year starting on Friday, Oct. 1 and says they'll have information about their tickets later in September.

Check out the website here to get your tickets.