The equipment being tested Monday will be used on Election Day to count the absentee ballots cast in 13 Oakland County communities on Nov. 2nd.

OAKLAND COUNTY, Mich. (FOX 2) - With Election Day a week away, Oakland County is running tests to make sure it is ready for it. As Election Day draws near the clerk and Register of Deeds Lisa Brown is taking action.

"I think it’s important for people to understand all the checks and balances that go into place for us to conduct an election before and after," Clerk Lisa Brown said.

It’s called the Public Accuracy Test, one of the systems Brown says works to ensure the security, accuracy, and transparency of the electoral process.

After questions arose about the accuracy of the 2020 presidential election - all of which have been unfounded - Brown believes more people are paying attention to the process.

"It’s always been transparent, open to the public process," Brown said. "But more are paying attention now, which I think is great."

The equipment being tested Monday will be used on Election Day to count the absentee ballots cast in 13 Oakland County communities holding elections on Nov. 2nd.

"I feel it’s always been working never thought anything was wrong with any of the machines," said one county resident.

But Brown believes testing ensures that when you mark your ballot, your choices are accurately reflected in the system.

It’s also a chance for members of the public to observe the process.

"The canvas afterward is open to the public so anyone can come and watch that," Brown said.

Fox 2 reached out to Detroit’s City Clerk Janice Winfrey and she says their Public Accuracy Test will take this Thursday and a press conference will follow. 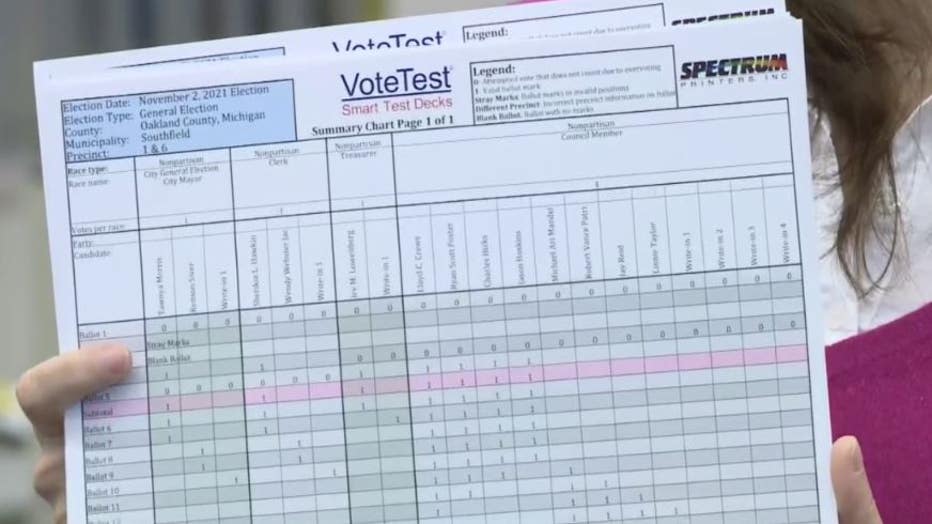 "We use Hart InterCivic equipment," she said. "We don’t use Dominion, that's not what I chose for Oakland County."