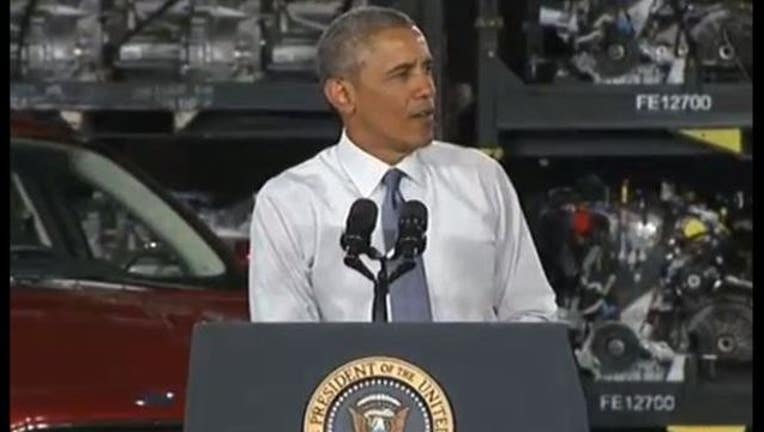 WAYNE, Mich. (AP) - President Barack Obama visited a Ford Motor Co. assembly plant in suburban Detroit Wednesday as part of a three-state swing ahead of his State of the Union address.

The president  highlighted the role of his decision to rescue the auto industry in saving American jobs, but first he quipped about the Detroit Lions' playoff defeat to the Dallas Cowboys.

He said that he would have been a "a little irritated" if that happened to his Bears.

"Even a Bears fan has to admit that was a little suspect," he said. "I have never seen anything like that before.

"One thing you can always take to the bank is that Detroit always comes back, and that's why I am here."

Obama said that one of his new year resolutions is for everyone to feel like they are coming back. He said that due to the steps taken to rescue the economy, there is confidence that America is coming back.

Obama said the auto bail out was not popular at the time when the decision was made.

Ford was the only American automaker to not accept any of the federal aid.

In the past five years, 500,000 new jobs were added to the industry as well, he added. Among them were jobs that Ford returned from a plant in Mexico, he said.

He said that the auto industry recovery has been key in securing the middle class' future.

"The auto industry has proved that any comeback is possible," he said. "And so has the motor city."

Obama touched on Detroit's recovery from bankruptcy and the positive changes in both the public and private sectors.

The White House has said that Obama's visits to Michigan, Arizona and Tennessee this week aim at highlighting how his economic policies aid America's recovery.

Obama is to visit Arizona on Thursday and Tennessee on Friday.

Copyright 2015 The Associated Press, MyFoxDetroit.com. All rights reserved. This material may not be published, broadcast, rewritten or redistributed.