Some wonder if former President Donald Trump's message has grown stale - while others say he is what's needed after a troubled first two years of the Joe Biden regime.

SHELBY TOWNSHIP, Mich. (FOX 2) - Despite the midterms ending only a week ago, it's the 2024 general election that many are now looking toward.

In their first meeting following a bruising 2022 Midterm election, the Republican Party in Macomb County reelected Mark Forton as the chairman.

With Democrats sweeping statewide races and taking control of the legislature, local party officials sought to regroup in one of the state's more conservative counties. The rowdy convention saw hundreds of members pile into Shelby Gardens Banquet Center in Shelby Township.

Forton previously faced a challenge to his seat in the early stages of the midterm election when some delegates tried ousting him from the leadership position and elevating another party official Eric Castiglia.

While Castiglia was seen as a potential opponent to Forton's seat this term, he had called for unity in the party in the day before the convention.

"I had a choice to make. Keep the division going? And hold separate conventions or hold one joint convention. I choose the path that can help lead to us uniting," he said in a letter to delegates this week. 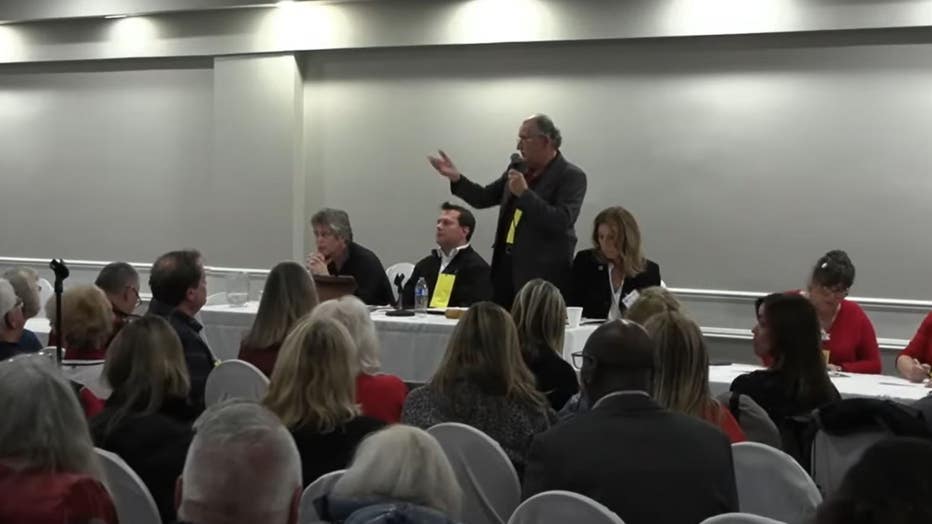 FOX 2 reached out for a statement from the party and Forton, but did not immediately hear back.

While division may have defined the Macomb GOP in the weeks leading up to the election, it was a schism between candidates and the party leadership at the state level that revealed where future fractures could happen.

A report completed by the party laid the blame of the electoral losses at the feet of gubernatorial candidate Tudor Dixon, saying her low name recognition and lack of fundraising doomed the party. But Dixon, who lost the governor's race by double digits said the state party co-chairs Ron Weiser and Meshawn Maddock deserved blame.

In a video posted on Facebook after the election, Forton agreed, saying the state party lacked the ability to win major elections.

"I believe the fault lies at the feet largely, in a few places, but largely with the Michigan Republican Party," he said. "They never intended to beat the top three," alluding to Gretchen Whitmer, Dana Nessel, and Jocelyn Benson.

He called on both co-chairs to resign.

Weiser and Maddock represent two different wings of the Republican Party - an establishment figure and a Trump-backed figure. Matthew Grossman, a political scientist at Michigan State University said the brewing power struggle between the two sides will give Michigan a peek at what the next slate of candidates could look like in 2024.

As it stands, candidates that had Trump's endorsement are leading the charge, he said.

"The energy is on the Trump side of the party," he said. "Even though arguably it was the most moderate candidates that performed the best (in the 2022 midterms), the recriminations may come from those who are more supportive of the more Trumpy candidates."

Weiser has already said he won't be running for reelection and it's unclear of Maddock will run. Both Dixon and Matthew DePerno, the failed candidate for attorney general, are now eyeing the party's top seat.

Both had Trump's backing, but it was DePerno that pushed harder for overturning the 2020 election - a popular issue that candidates who were endorsed by Trump campaigned on.

The election for state party chair isn't until February, but some political strategists believe DePerno has the upper hand.

"@TudorDixon has zero chance to beat DePerno at a convention," wrote Jeff Timmer on Twitter. "My advice to her and her team: accept co-chair spot. When Matt goes to prison soon, voila! Dixon can become chair then."

Adding to the uncertainty is the criminal probe hovering over DePerno and his activities following the 2020 election when he allegedly tampered with voting tabulators. According to the Detroit News, even if he is charged he could still run for the position.

Another factor hovering over the Michigan Republican Party is Trump's announcement he is running for reelection. Grossman said his return to the campaign may further energize both supporters and opponents of the former president.

"It may stimulate some people who don't want Trump to mobilize more than they would. But obviously, he presents a big source of support for the GOP and may drive some to take sides early," he said.