DETROIT - Operation Legend officially kicked off in Detroit on Wednesday with officials from several federal agencies joining together for a press conference.

Against the backdrop of high tensions between local police forces and citizens in the city and around the country, members of the DEA, ATF, FBI, and U.S. Marshals Service announced 42 additional federal agents and crime analysts would be joining federal forces already in the city to reverse a growing trend of gun violence that has erupted in the city.

Federal agents to arrive in Detroit as part of Operation legend

Feeral agents from the DEA, ATF, FBI, and U.S. Marshals Service are converging on Detroit to reverse a growing trend of gun violence.

"This flood of violence threatens the safety of communities and innocent bystanders are suffering," said U.S. Attorney Matthew Schneider.

Citing a 31% increase in homicides and a 53% increase in nonfatal shootings, Schneider said the growing presence of non-local law enforcement officers part of Operation Legend was in direct response to the gun violence - not demonstrations against racial injustice in Detroit.

"Let me be perfectly clear. There are no federal troops coming to Detroit or any other area in Michigan to interfere with protesters," he said.

Criticisms of federal involvement have heightened following reports out of Portland where protesters have clashed with federal officers. Schneider called any insinuation that agents were here to do anything else than reduce gun violence as "irresponsible rhetoric" that "destroy the trust between the community and law enforcement."

Detroit Police Chief James Craig, who says he supports the initiative has come under intense scrutiny from community activists. During a rally on Tuesday, members of the group Detroit Will Breathe called on Craig to resign, following three separate cases of police-involved shootings. Two of those shot died, while the third was hospitalized.

Craig has cited an increase in anti-police rhetoric mixing with incarcerated individuals out on early release due to the COVID-19 pandemic as reasons for the spike in gun violence. 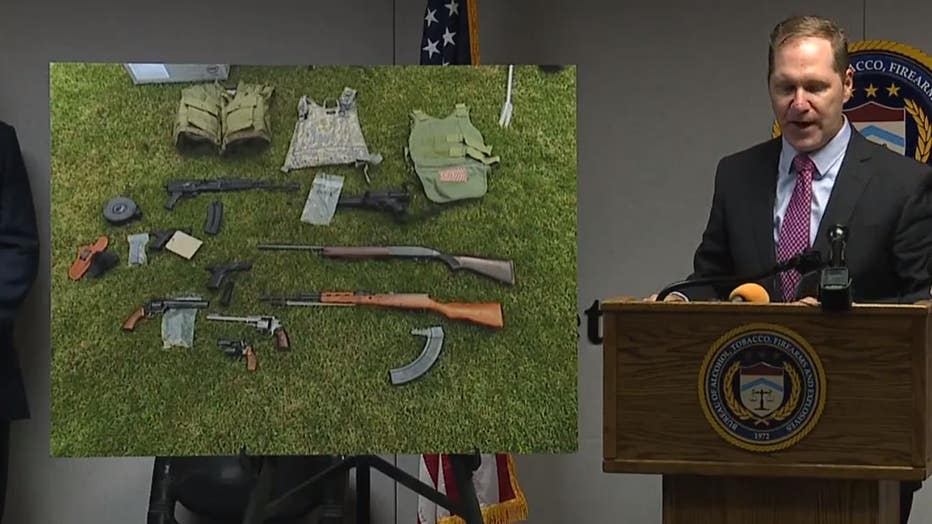 U.S. Attorney Matthew Schneider reveals some of the weapons found during a DEA raid on a home in Detroit recently.

Schneider and James Deir, head of the Alcohol, Tobacco, Firearms, and Explosives Detroit division echoed those sentiments on Wednesday.

Elaborating on an example of a string of arrests and releases of a suspect starting in December of 2019, Deir outlined a pattern of arrests, releases, surveillances of the individual illegally coming in possession of more firearms as the problem with early releases.

"...when we're asked what's the cause of this violence, part of it is people are getting bond and getting on the streets," he said, "part of it is unsupervised probation, part of it is...if you look at the statistics of this trend, it's people and accessibility to illegal firearms."

Among the incidents frequently cited as a result of rising gun violence is the death of Nathaniel Messiah Townsend. The 4-year-old was shot and killed instantly after two assailants started firing into his grandma's house where he was staying.

In response to his killing, the FBI announced a $25,000 reward leading to the arrest of those responsible.

Operation Legend isn't the first city-federal partnership to curb gun violence to come to Detroit. Last December, Operation Relentless Pursuit started underway that Schneider said led to the arrests of 400 wanted individuals, many of whom were already being search for by DPD officers.

Both Detroit Mayor Mike Duggan and Craig support the new partnership and disavowed any notion that federal agents would be policing peaceful protests.

"We believe there is no lawful basis for Homeland Security intervention in the Detroit protests today, or for any increased presence of Homeland Security agents in our community. Today’s announcement appears to respect that position," they said in a joint statement. "We have to address the unacceptable level of gun violence in Detroit through greater efforts by federal, state, county, DPD, and community partners all working together."

Shortly following the press conference, dozens of protesters were spotted outside Brewery Park rebuked the operation.

At the time, reports of peaceful protesters being detained without probable cause in unmarked vehicles had been published. On July 29, the governor of Oregon said federal agents would leave Portland.

Below is a list of the total number of federal personnel now stationed in Detroit: