The school board feels the water is too murky with what could happen if it broke from Oakland County’s mask mandate. Some are hoping the board will make it clear by drawing a line in the stand.

OXFORD, Mich. (FOX 2) - Oxford's school district is considering bucking the system of mandating masks on in the classrooms.

The school board feels the water is too murky with what could happen if it broke from Oakland County’s mask mandate. Some are hoping the board will make it clear by drawing a line in the stand.

Violation of the mask mandate is a misdemeanor with fines up to $1,000. The questions of who would pay and whether the misdemeanor would be enforced are all part of the district's food for thought.

But before even discussing the issue of whether or not the Oxford school district should go against the mask mandate by the county, the audience was told there would not be a vote Tuesday, citing the issue is to critical to decide with only five of the seven members present.

It prompted one person in the audience to ask why all seven school board trustees weren't in attendance during a tense back-and-forth.

"You’ve come into my office twice. you harassed me," said school board president Thomas Donnelly, Jr. "I kicked you out."

The audience member continued to pipe up and interrupt, however.

"Enough, stop," Donnelly said. "Everyone else is quiet."

"I asked where they were," the man said, referring to the absent board members.

From there the school board president laid out all the steps of what could happen if they were violating state law by breaking the county health department’s mask mandate.

"We've never taken a vote (among the board) and asked who is pro-mask and anti-mask, it doesn't matter," he said. "We're elected individuals told to obey the constitution of the United States and the constitution of Michigan. "I have been burrowing in, to what does that mean."

He says the board’s intention is not to violate the law, they just are looking for clarity as to who the law is intended to protect. (He said they are) wondering if they don't follow the mandate, will they be protected in case of a worst-case scenario.

"They are telling me I have to follow the mandate until the mandate changes," he said. "Because of all the risks I have talked to you about for months - losing government immunity, having your insurance coverages pulled away saying we won't protect you if you get sued."

The school board president says until those answers are given, they don't feel they have enough information to vote on whether or not to lift the mask mandate for students in Oxford. The mandate is in place for all school districts within Oakland County.

"I hope I didn’t make the biggest mistake of my life moving to this county," said one parent at the meeting. "I won't say this city, but this county."

"You have an opportunity to stand apart and in some small way, allow for the concept of all political is inherent to the people, to mean something again."

"Oakland County wholeheartedly supports the health division’s mask requirement for schools. When combined with the COVID-19 vaccine and other measures, it is keeping our kids safe, healthy, and in school, especially when kids 18 and younger account for one in four new COVID-19 cases.

"Just over half the eligible residents 12 and older in the Oxford area have been vaccinated. Add to that the seven-day case average and hospitalizations continuing to rise, and it is all the more essential to wear masks and utilize other safety measures in our schools." 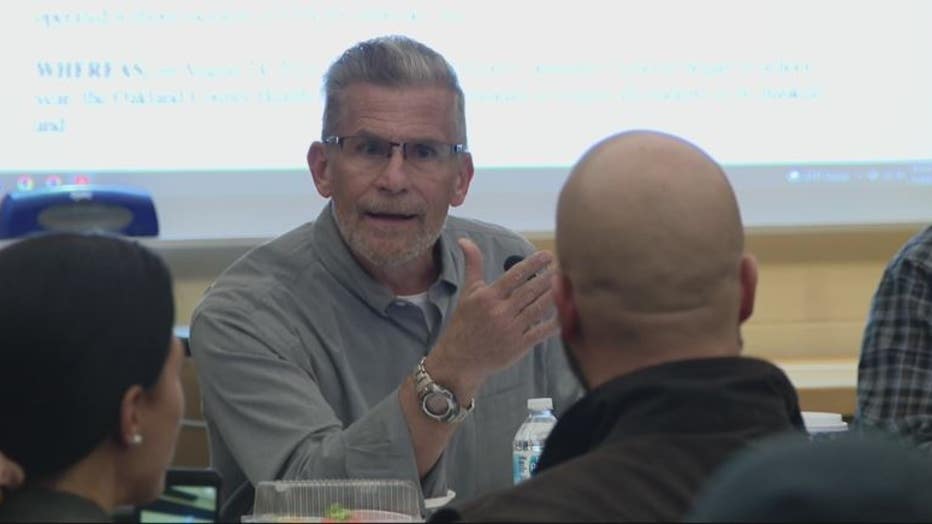 Oxford school board president Thomas Donnelly, Jr. had a tense back and forth with an audience member who spoke out Tuesday.

The next Oxford meeting is scheduled for December 14th.