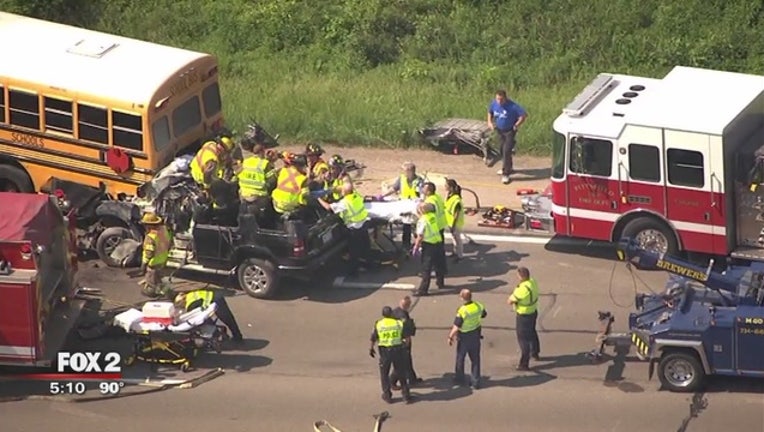 YPSILANTI, Mich. (WJBK) - A woman in the passenger seat of a vehicle involved in a devastating I-94 crash on May 29 has died, according to police.

Michigan State Police say 28-year-old Antoinette Butler of Ypsilanti died on Friday from her injuries in a crash on eastbound I-94, west of US-23, near State Street that killed another man.

Police say a tow truck driver was working on a disabled bus on the side of the road that had a flat tire when an SUV crashed into the back of the school bus. The impact killed 42-year-old tow truck driver Nader Chehadi of Ypsilanti.

Witnesses told police they saw the driver of the SUV make an abrupt lane change to the right, crossing all lanes of traffic, before driving onto the shoulder. The driver then tried to get back on the freeway, but hit the back of the school bus.

According to state records, driver Andre Edwards, the mother of the three children, had her license revoked twice since 2009. The most recent time was for having three or more alcohol-related convictions in 10 years.

Police also say the three children in the backseat were not wearing seatbelts or child restraints at the time of the crash. It is not known whether the driver and front passenger, who has died, were wearing seatbelts.

Chehadi was the daytime supervisor over drivers at the towing company, a husband and a father of two children under the age of 5.