A man was taken into custody in Bellflower after leading authorities on a pursuit through Los Angeles and Orange counties in a stolen U-Haul on the morning of May 11.

BELLFLOWER, Calif. - A Costa Mesa man who led authorities on a pursuit in a stolen U-Haul truck through Los Angeles and Orange counties on Tuesday morning was taken into custody in Bellflower.

The U-Haul was initially reported stolen on May 2 and the U-Haul was carrying an estimated $100,000 worth of property at the time, Irvine PD said.

On the morning of May 11, Buena Park police officers ran the tags of a U-Haul that they spotted in the area in the area and saw the vehicle had been reported stolen.

A pursuit that lasted for hours through Los Angeles and Orange counties came to an end in Bellflower on Tuesday morning after the stolen U-Haul erupted in flames.

The driver refused to stop when approached by officers and the pursuit began.

Patrolling CHP officers in the Santa Fe Springs area took over the pursuit that was initiated by Buena Park PD who led officers on the 605 Freeway north of Alondra Boulevard.

As the pursuit continued, California Highway Patrol took as the suspect led CHP officers to the southbound 5 Freeway toward Los Feliz. 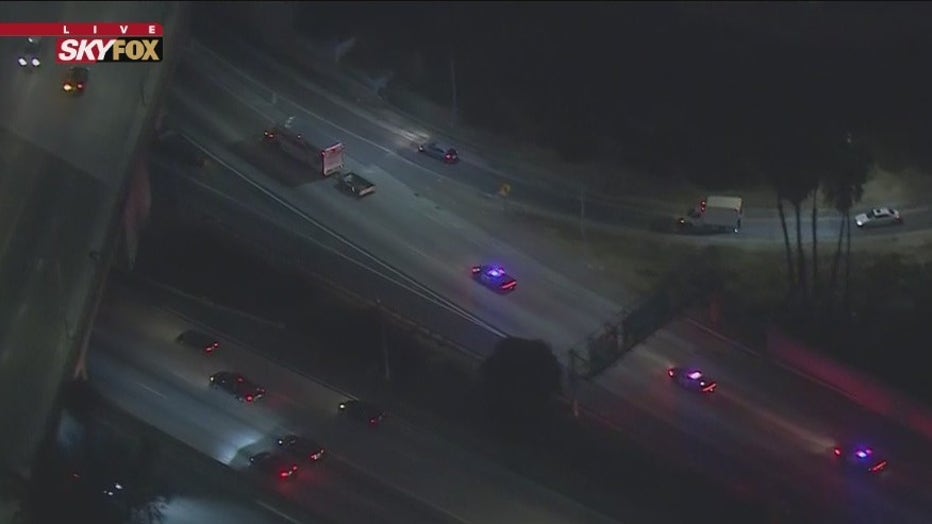 The U-Haul was 26 feet, the largest available for rental, and was carrying a trailer. It was unclear if there was anything inside the rental truck or what happened to the goods that were inside when it was first reported stolen. 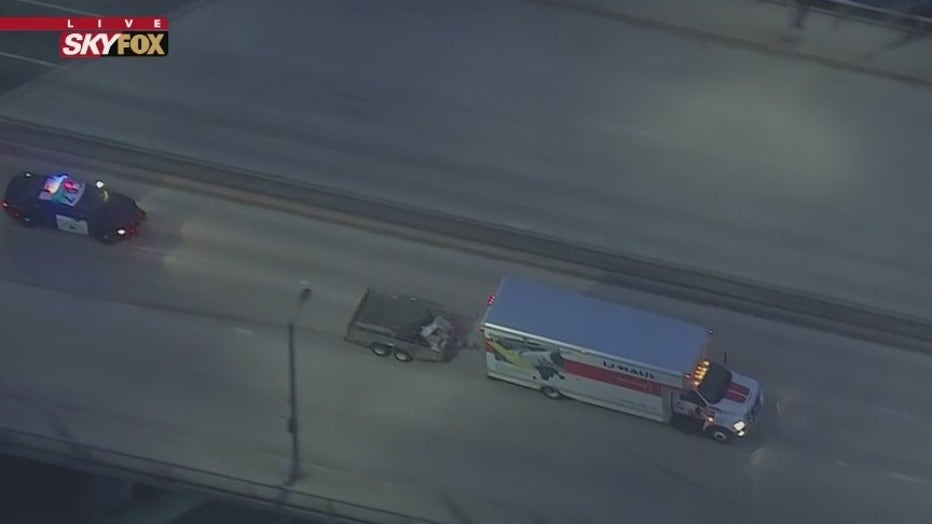 Just after 5:30 a.m., the suspect exited Los Feliz Boulevard before merging back onto the freeway with light traffic.

By 5:55 a.m., the Los Angeles Police Department joined the pursuit as the suspect traveled in the Norwalk area. 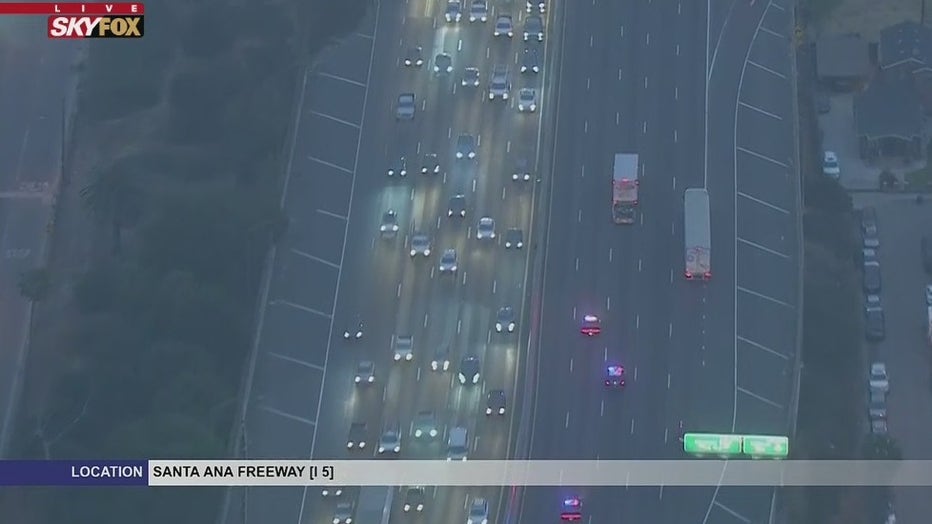 The chase continued onto the southbound 605 Freeway a few minutes later.

By 6 a.m., the suspect then merged onto the eastbound 91 Freeway toward Orange County where there was a thick marine layer making for overcast skies. 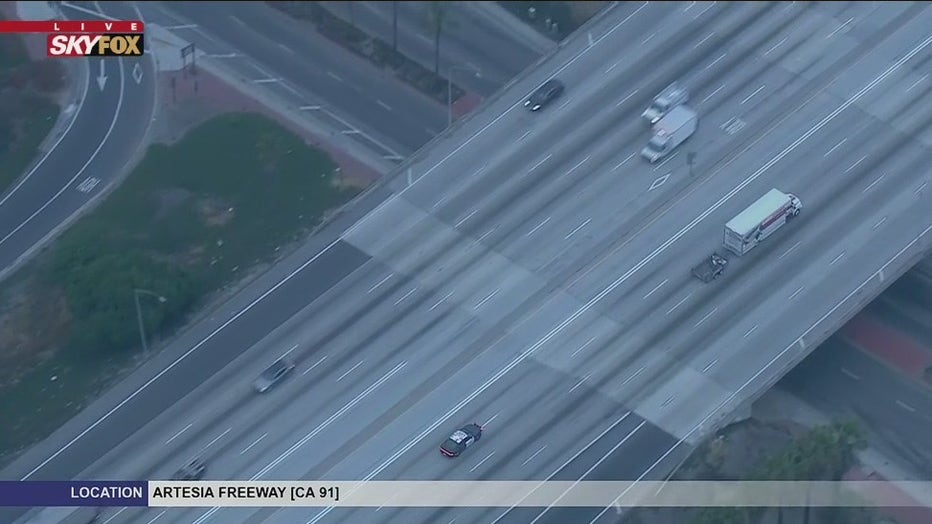 Officers deployed spike strips just after 6:10 a.m. in the Fullerton area. However, the pursuit continued despite the truck having at least one blown tire.

The pursuit then moved to the westbound side of the 91 Freeway where the truck was unable to travel faster than 20 mph.

Authorities were concerned the sparks being generated from the blown tire could create a fire as the pursuit appeared to be coming to an end around 6:35 a.m. Despite the vehicle's condition, the male suspect continued to push the U-Haul to its limit.

Police pursuit on the westbound 91 Freeway

A suspect drove a U-Haul to its limit on the westbound 91 Freeway on Tuesday morning.

By 6:45 a.m., the left side of the vehicle was on fire as the driver refused to comply.

As the suspect approached the Bellflower area, the vehicle erupted in flames. The suspect got off the freeway, exited the vehicle, and ran from the authorities on Park Street in Bellflower.

Officials canvassed the area for the suspect where he was taken into custody by the CHP just before 7 a.m. 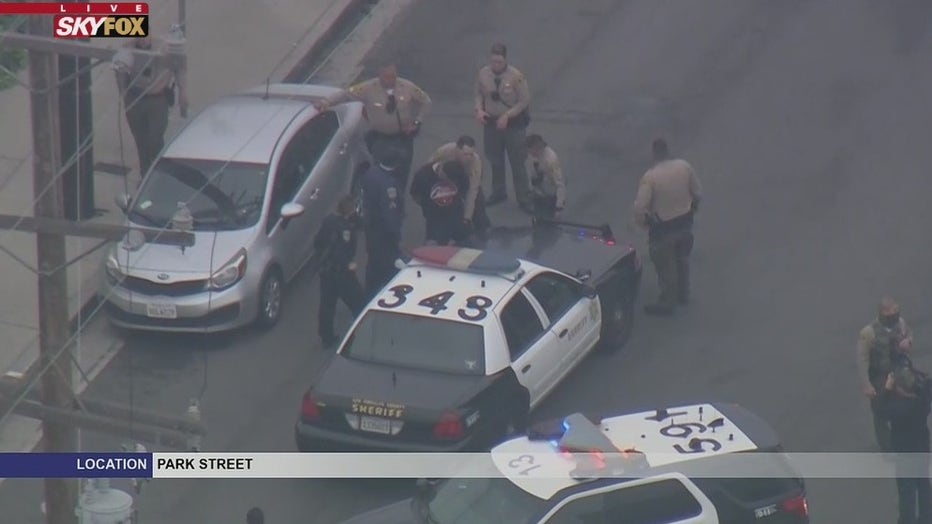 The suspect was identified by the CHP on Wednesday as Joshua Michael Mikulay of Costa Mesa.