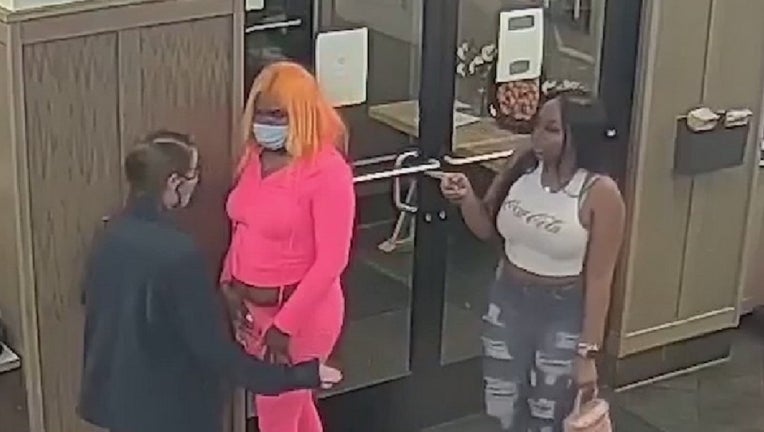 ATLANTA - Atlanta police are searching for the people responsible for throwing bricks at the Chick-Fil-A on Roswell Road in northeast Atlanta.

According to police, two women came into the store Monday evening and were told by an employee the dining room was closed due to COVID-19 restrictions.

"At some point, there was an exchange of words, which escalated into an argument," said Officer Anthony Grant.

This interaction is caught on surveillance video from inside the store.

Grant said the two women later returned with two others and came to the drive-thru.

Two women are wanted for throwing a brick at the drive-thru window of a Chick-fil-A in Georgia.

One of the people in the group attempted to climb through the drive-thru window, police said, and they also threw bricks at the windows.

"You can't do that. It's brazen. It's uncalled for. It's just not the right thing to do," Grant said.

The video from inside the store shows a woman shouting and throwing things against the window.

Grant said all four people left in a white Cherokee before police arrived.

Luckily, none of the employees were hurt, but there was damage to the store.

Officer Grant said anyone who finds themselves in a situation like this, do not try to handle it alone.

"We want good witnesses, not heroes. So, if you are in an event where you can get to a phone and call 911, which the employees at the Chick-fil-A did, which was the right thing, the appropriate thing. Call 911," Officer Grant said.