CLINTON TWP., Mich. (FOX 2) - A Clinton Township man is facing murder charges after allegedly shooting his wife in the face over the weekend. It turns out police had just been to the couple's hope right before the shooting.

Kyle Wosowicz's family wept when he appeared on the screen -- the first time they've probably seen him since Saturday night when investigators say he shot his *own wife in the face. Now he's charged with her murder

Kyle Wosowicz's family wept when he appeared on the screen -- the first time they've probably seen him since Saturday night when investigators say he shot his own wife in the face. Now he's charged with her murder.

"This was so avoidable in every way possible. The police were at the scene of the crime an hour earlier," said Macomb County Prosecutor Eric Smith.

Police were there Saturday the first time because they'd gotten calls there was loud arguing and someone had heard gunshots, but the prosecutor says both Kyle and Nicole when asked said there wasn't a problem.

"When he and the victim were asked about it, both denied it. Both were in good spirits, there was no arguing going on. They were having a barbecue as a matter of fact and invited the officers to join them, so the officers had no reason to think that our victim was in any danger, especially when they interviewed her twice. Once with the defendant there and the once by herself," Smith said.

He said each time she said she was fine and that everything was great.

"It was heartbreaking," said neighbor Leanna Turner. "She was the nicest person I ever met."

Witness: Gunman came out of house shooting after killing wife

A teen neighbor said Nicole and Kyle came over to his aunt's house often and there didn't seem to be a problem between the two.

"There was never any domestic abuse in the relationship that we're aware of," she said.

When Clinton Township police came back to the house, they say they found Kyle outside in only his boxer shorts, racking a shotgun. They got him to the ground and arrested him

"He came outside and waved around a gun and said I'll kill everybody, and fired off five shots, which one of them, he shot at my car," Turner said.

When police went inside the house, that's when they say they found his wife, 26-year-old Nicole Larocca in the family room with a gunshot wound so severe they were certain she wouldn't survive. The prosecutor says she had been shot at close range. 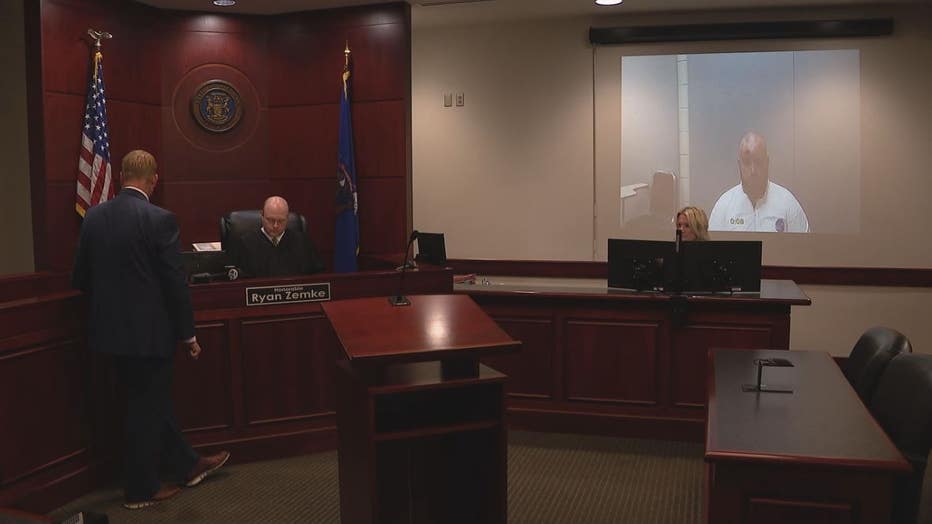 "Any time you come across a young lady who's healthy in every way possible and her life is extinguished in such a violent fashion, it plays on all officers," Smith said.

Kyle, a CPL holder, is now charged with second-degree murder and felony firearm. He was denied bond.

The probable cause conference is scheduled for Oct. 9.