DETROIT - As more than 50,000 UAW workers strike against General Motors, the Detroit automaker is losing $50 million each day, but there is some progress in talks but a deal is still not in place.

Contract talks between the United Auto Workers and General Motors showed some signs of progress Tuesday as a strike by more than 49,000 employees extended into a second day.

The walkout brought to a standstill more than 50 factories and parts warehouses in the union's first strike against the No. 1 U.S. automaker in over a decade. Workers left factories and formed picket lines shortly after midnight Monday in the dispute over a new four-year contract.

As more than 50,000 UAW workers strike against General Motors, the Detroit automaker is losing $50 million each day, but there is some progress in talks but a deal is still not in place.

"They are talking, they've made progress, we'll see how long it takes," said Brian Rothenberg, spokesman for the UAW.

One of the main sticking points is health care. GM is looking to cut its costs, but workers say they shouldn't have to pay more because the company is making billions in profits. Union workers pay about 4% of their health care costs, but employees of large companies in the U.S. pay an average of 34%, according to the Kaiser Family Foundation.

Tina Black, who finishes up 10-speed automatic transmissions at a GM engine and transmission factory in the Detroit suburb of Romulus, said health insurance is the most important issue to her, and she doesn't want GM to change anything. 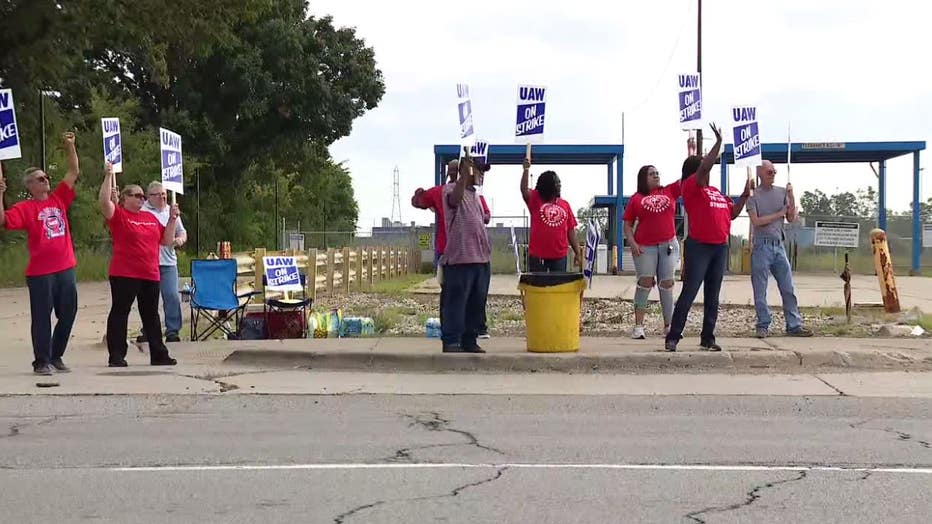 The factory workers, she said, work 10-12 hours doing the same repetitive tasks, which can cause injuries.

"It breaks down your body," said Black, of Garden City, Michigan. "In order to take care of ourselves, we need that."

On Sunday, GM said it offered pay raises and $7 billion worth of U.S. factory investments resulting in 5,400 new positions, a minority of which would be filled by existing employees. The company also said it offered higher profit sharing, "nationally leading" health benefits and an $8,000 payment to each worker upon ratification.

In addition, GM pledged to build a new all-electric pickup truck at a factory in Detroit and open an electric vehicle battery plant in Lordstown, Ohio, according to a person who spoke to The Associated Press on condition of anonymity. The person was not authorized to disclose details of the negotiations. The new factory would be in addition to a proposal to make electric vehicles for a company called Workhorse, the person said.

It's unclear how many workers the two plants would employ. The closures, especially of the Ohio plant, have become issues in the 2020 presidential campaign. President Donald Trump has consistently criticized the company and demanded that Lordstown be reopened.

Gary Chaison, professor emeritus of industrial relations at Clark University in Massachusetts, expects the strike to end within a week. He sees it as more of a message to show how effective the union is, especially for nonunion workers who might be asked to join the UAW.

GM's offers, he said, seem to be pretty good, so the strike is a mystery to him. "I can't see a prolonged strike coming out of this," he said. "I think there's too much to lose and not enough to gain."

GM and the union are negotiating a four-year contract at a time of troubling uncertainty for the auto industry. President Donald Trump's trade war with China and his tariffs on imported steel and aluminum have raised costs for carmakers. A revamped North American free trade deal is stalled in the U.S. Congress, raising doubts about the future of America's trade in autos and auto parts with Canada and Mexico, which last year came to $257 billion.

Under the pressure of rising tariffs, manufacturers everywhere are struggling. J.P. Morgan found that global manufacturing shrank in August for the fourth straight month, the longest losing streak since 2012. The Institute for Supply Management, an association of purchasing managers, reported this month that American factory output fell in August for the first time in three years.

Jeff Schuster of LMC Automotive has forecast that U.S. auto sales will drop 1.7% this year from 2018 -- though they will remain solid at 17 million cars and trucks sold.

The strike shut down 33 GM manufacturing plants in nine states across the U.S., as well as 22 parts-distribution warehouses. It's the first national strike by the union since a two-day walkout in 2007 that had little impact on the company.

Workers at Fiat Chrysler and Ford continued working under contract extensions. Any agreement reached with GM will serve as a template for talks with the other two companies