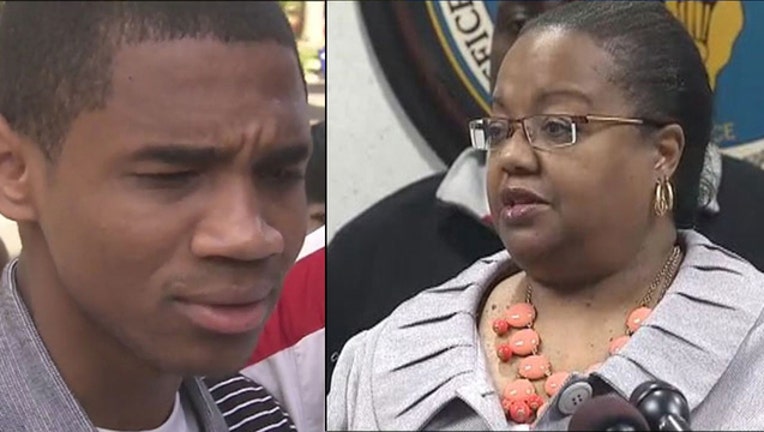 DETROIT (WJBK) - Detroit's top prosecutor on Thursday defended how her office handled the case against a young man who spent eight years in prison before his guilty pleas to four fatal shootings were thrown out, years after a hit man claimed responsibility for the crimes.

Davontae Sanford was 15 when he pleaded guilty and was imprisoned in 2008. Sanford walked out of prison Wednesday, after a judge erased the guilty pleas at the request of Wayne County prosecutor Kym Worthy.

Worthy said during a news conference Thursday that her staff wasn't "running rogue" and trying to railroad Sanford, who was 14 at the time of the killings. Worthy said she acted swiftly after state police found problems with the Detroit police investigation in the 2007 killings.

Sanford had pleaded guilty to the murders of four people, Brian Dixon, 31; Michael Robinson, 33; Nicole Chapman, 29; and D'Angelo McNoriell, 31. One other female was injured but survived the so-called Runyon Street shooting. She heard one of the shooters ask about valuables in the home while she was hiding under the bed. She identified the voice under oath as Sanford's.

The shooting happened at a home in September of 2007 on the 19,400 block of Runyon Street, which is near Hoover Street between 7 and 8 Mile roads. A child was also in the home at the time of the shootings but was not injured.

Sanford gave a confession for the murders, and pleaded guilty on the second day of trial. He was eventually sentenced to a minimum of 39 years in prison.

The case appeared closed and unremarkable until lawyers discovered the hit man's confession to the same killings -- along with eight other killings -- just 15 days after Sanford was sent to prison. That touched off years of efforts to get the guilty pleas set aside, but prosecutors resisted at every turn until state police were asked last year to take a fresh look.

A series of post conviction hearings began in 2009. Smothers was called to testify twice, but Worthy said at her news conference that he refused both times.

"I don't know what we could have done differently as this case went through time," she said. "We had a good reason to charge, we thought that when we charged this case it'd be proved beyond a reasonable doubt. Again, it seems to be glossed over that we started a trial and there was a guilty plea; he admitted responsibility for what he did. After that, there was a 2-years' long hearing where his guilty plea wasn't challenged."

You can watch a replay of her conference here. She declined to offer her personal opinion on if she believes anyone owes Sanford an apology.

Sanford, now 23, emerged from a prison in Ionia in western Michigan on Wednesday. He declined to speak to reporters in Ionia and quickly drove off with a brother and two lawyers for the 130-mile trip back to Detroit. A day earlier, Sanford's guilty pleas were erased by a judge at the request of prosecutors who conceded the case was compromised by flawed police work.

The agreement to throw out the convictions doesn't mention Smothers. Instead, Worthy said Detroit police -- not Sanford -- had drawn a diagram of the murder scene. She said that "seriously undermines" the entire case.

For years, Worthy's aggressive defense of the case angered Sanford's family and supporters, especially after Smothers offered extensive details about the murders and repeatedly pledged to testify on the young man's behalf.

One of Sanford's lawyers, David Moran of the Innocence Clinic at University of Michigan law school, said on Wednesday that it can be difficult for police and prosecutors to accept that a conviction that once appeared airtight is just the opposite.

"There's a tremendous cost when an investigation shuts down and minds close," said Moran, whose staff and students have a long list of victories. "We do encounter tremendous resistance when we present new evidence in actual innocence cases."

At the same time, he praised Worthy for finally recognizing that an "injustice had been done" in Sanford's case.

Margaret Raben, former head of a Michigan association of defense lawyers who isn't involved in the case, said Worthy deserves credit for asking state police to investigate, even after many years.

It's "startling," she said, that Smothers confessed immediately after his arrest but police ignored the admissions.

Michigan offers no financial remedy to people wrongly convicted of a crime. But Sanford can sue police over civil rights violations, which is a common practice in these types of cases, Raben said.

Smothers, 35, is in prison for 52 years after pleading guilty in 2010 to eight killings. He said he was regularly hired by drug dealers to kill others in the trade but would never take on someone like Sanford as a sidekick.