The standouts also run with Track Life University - some of whom FOX 2 met three years ago in middle school - when they were breaking records at the Junior Olympics.

Track stars from Detroit Renaissance High School have new national record and state title to celebrate. Now they're coming off a pandemic and faster than ever with their record-breaking performances leading to a larger, national stage.

Now they're coming off a pandemic and faster than ever with their record-breaking performances leading to a larger, national stage.

"Walking off the track I knew we were moving," said Madison Sheard. "But when I looked at the time it was just, 'Wow - we really did that.'"

"It felt good after a year of the coronavirus to be able to come back and do that," said Leeah Burr.

What they did was run the 4 x 100-meter relay in 45.52 seconds and won the 4 x 200 meter, too, with performances so strong they've been invited to compete in the National Scholastic Athletics Foundation Outdoor Nationals - presented by Nike in Eugene, Oregon at the end of June, at the site of the Olympic Trials.

"After we broke the record and got invited we were like oh we definitely have to go because we really have a chance at doing well at this meet," said Kaila Jackson.

These scholar-athletes have big goals.

"Break the national record and become national champions and so hopefully we all get a full ride at our dream school," said Olivia Jackson.

And of course - they're hoping for the Olympics.

"Having a great team to push you every day - that's what you need to get to the Olympics," Jackson added.

What we haven't told you is that they made it through a serious health scare.

Coach Darnell Hall - along with his wife, Karen Hall are grateful that after an aneurism in his aorta, emergency heart surgery, and stents - he's doing really well.

"When it first happened it was like - you're Superman - what are you doing - but he came back stronger than ever," said Jayla Graham.

"I love it - considering what I just had to go through, and they told me they had my back," Darnell said. "This season - they said it was for me - and I really appreciate it - I'm glad I'm still here.

"If there was anything that came out of it, it brought awareness to it - especially Black males to take care of your health - you know hypertension, and all that stuff." 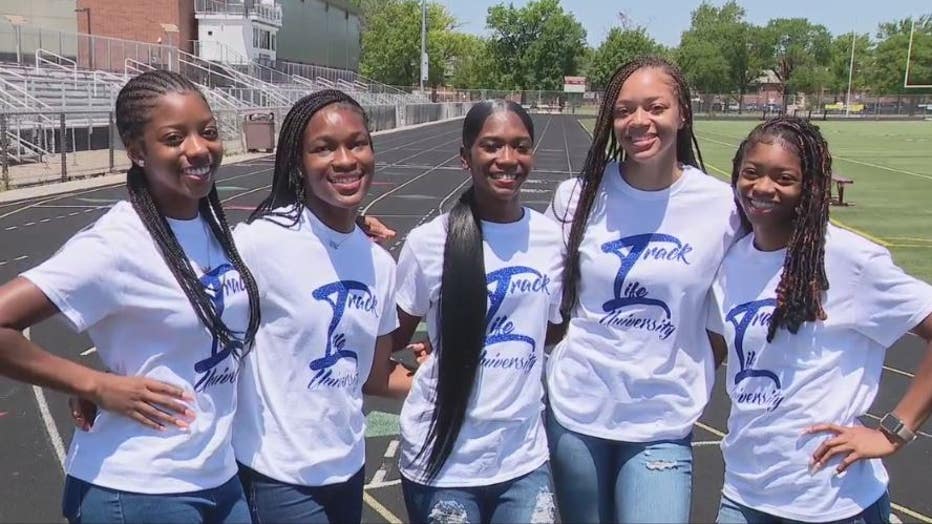 While he's still recovering and coaching the 150 kids who are part of Track Life University, Karen is concentrating on getting this team - to Oregon.

"Track life is more than just track - track life is a family, it is a lifestyle and the ultimate goal is we want our young people to have some life skills," Karen said.

Like overcoming adversity - which they did - coming out of Covid to set a new national record.

"For them to come out of covid and run a 45.5 is unbelievable," Karen said.

And who knows what they will accomplish next.

To help send them to Oregon - visit their GoFundMe HERE.