DETROIT (FOX 2) - Another 4x100 relay and another victory - this one at the national championships in Eugene, Oregon - the site of the Olympic trials.

The Renaissance High School women set a new Hayward Field record with a time of 45.92 seconds.

From the National Championships in Eugene, Oregon to the West Coast Junior Olympics, the Renaissance girls track standouts have been on a tear.

"It was a really good experience just to be at the track because many Olympic runners ran there so it's just really nice," said Leeah Burr.

"It just felt good to work with amazing girls  - to do our best and we strive every day to be great and to be better each time," said Olivia Jenkins.

"We definitely enjoyed ourselves but we also put in a lot of work and we brought home the gold," said Jayla Graham.

Did they ever - in both the 4x100 and 4x200 relays. Then they went to the West Coast Junior Olympics in Las Vegas and did it all again - thanks to so many FOX 2 viewers who stepped in and donated to get them there.

"We were really grateful for that and we competed well - we won in both of our relays so it was just a great experience," said Kaila Jackson.

"Thank you to everyone who donated to us - who supported us along the way - and I hope we made you proud," said Madison Sheard.

These young ladies have been making us proud for years and were recognized on Monday with the Spirit of Detroit Award from the Detroit City Council.

They've had great inspiration in their coaches - Olympic gold medalist Darnell Hall and his coach, Calvin Johnson, are now their head coaches at Renaissance.

"It's the best feeling in the world - just to see their faces - they had a goal - they accomplished their goal," Hall said.

Proud coaches - and a proud father - assistant sprint coach Anthony Jackson watched his daughter Kaila set a new US record in the 200-meter dash at the Junior Olympics - with a time of 22.85 seconds.

"To see them mature and get to this level and perform at this level on the highest stage, it's really amazing to watch," he said.

Their high school principal feels the same way - especially seeing this kind of success coming out of a pandemic. 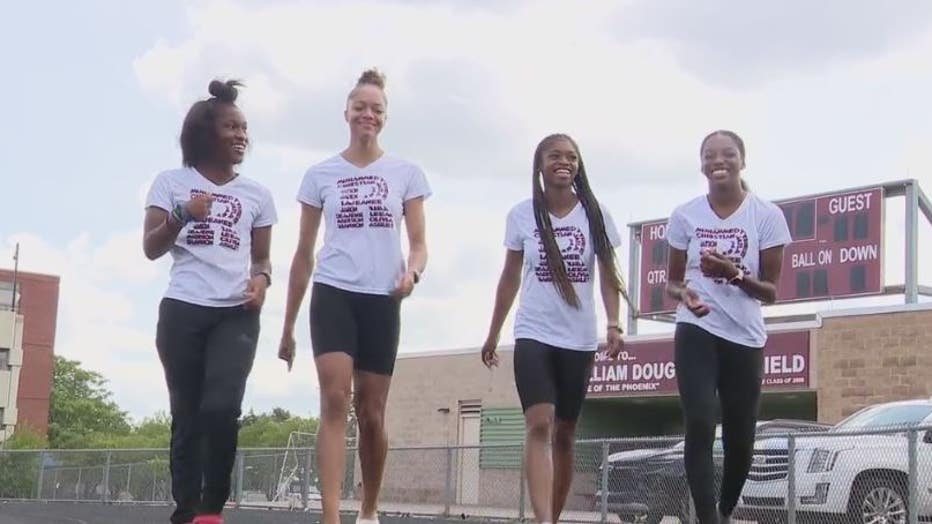 "Still stay focused - still stay in shape - still be able to compete and at a high level says a lot about each one of those young ladies and the coaches," said Verynda Stroughter.

So what's next? The East Coast Junior Olympics in Houston, Texas in just about a week and a half.

"In the east coast it's quite a bit more competition," Jackson said. "So we will have more people to push us but hopefully we come out on top again and if we do that would just be very exciting."

Exciting for them - an inspiration for all of us - and for young girls everywhere.

"You can come from anywhere and do anything that you want," Jackson said.

"Really just stay determined - stay focused - and remember to have fun while you're doing it," Sheard said.