REDFORD TWP., Mich. (FOX 2) - It wasn't just a car crash at Evergreen and Outer Drive on Detroit's west side on Wednesday.

The men inside were part of a suspected serial house break-in crew using a van with a Florida license plate on it. The suspects fled after trying to break into a house they thought was unoccupied but the owner had been in the shower.

It wasn't just a car crash at Evergreen and Outer Drive on Detroit's west side on Wednesday.

Three of the four men were caught by police, but they need your help to catch the fourth.  Police say the suspects were usually armed and dangerous.

"We've probably been dealing with this crew for approximately two weeks now," said Capt. Al DiPrima, Redford Township police. "We believe they may be responsible for four to seven home invasions."

The suspects are serial burglars wanted for breaking into homes the last few weeks, stealing electronics and anything they can get their hands on. They rode around in their Dodge van waiting for people to go to work - or even brazenly pulling into their driveways - and knocking to see if they are home first.

"Obviously if no one's home what they've been doing is going to the back, kick in the back door and break-in to gain entry into the home," DiPrima said.

But Redford police say - they slipped up February 16th. A Ring doorbell from a home near Grand River and Beech Daly captured video of the thieves and that van.

Police were on the lookout already late Wednesday morning - when an alarm went off at a home near Linden and Inkster where the resident surprised them by being in the shower.

"Patrol officers tried to stop the vehicle, but it fled," DiPrima said.

The crew then crashed into two cars - at Outer Drive and Evergreen.

"I heard the boom and I got up and I looked and there was the car," Adrian said.

The four men were seen taking off.

"I just saw two guys taking off with guns," said one witness

"Running and jumping out in the middle of traffic," said another.

Redford police said the van was stolen from Detroit after they apparently carjacked someone.

"It's not just a typical b and e crew, where go and take stuff and leave," DiPrima said. "A lot of these people are armed and sometimes these home invasions turn into physical assaults, more violent crimes."

Redford - along with Detroit and Michigan State Police, teamed up in the capture of three suspects.

When it comes to finding the fourth man -  "It's just a matter of time," DiPrima said. 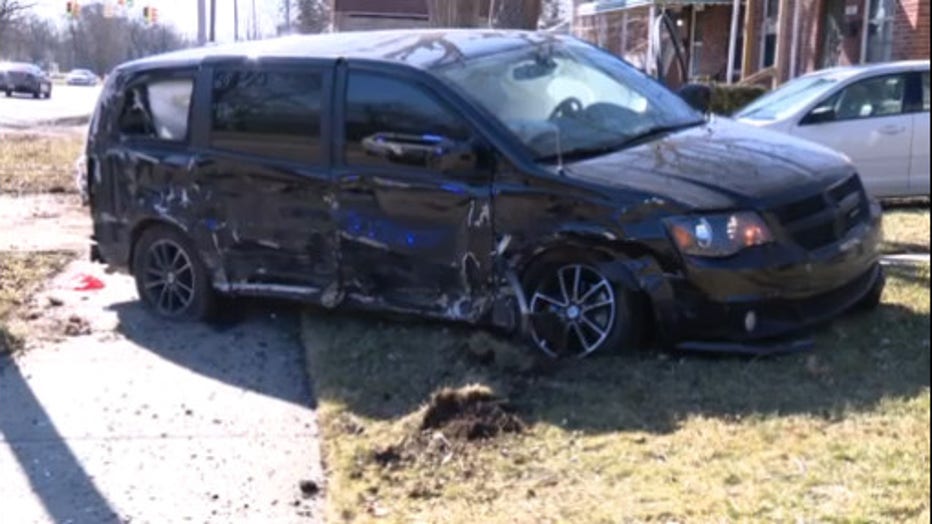