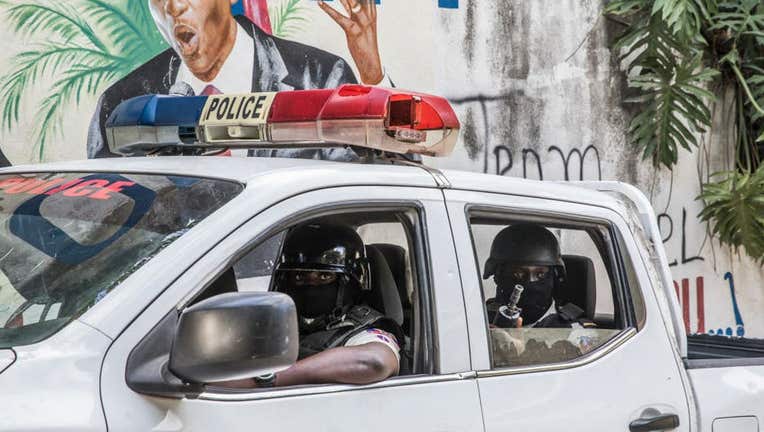 FILE - A police convoy drives past a wall painted with the president's image down the alley of the entrance to the residence of the president in Port-au-Prince on July 15, 2021, in the wake of Haitian President Jovenel Moise's assassination on July 7

PORT-AU-PRINCE, Haiti - The remaining members of a missionary group who were kidnapped two months ago have been freed.

The spokesman for Haiti's National Police, Gary Desrosiers, confirmed to The Associated Press that the remaining hostages had been released, but did not immediately provide additional details.

"We glorify God for answered prayer -- the remaining 12 hostages are FREE!" Christian Aid Ministries said in a statement. "Join us in praising God that all 17 of our loved ones are now safe."

The missionaries were kidnapped by the 400 Mawozo gang on Oct. 16. There were five children in the group of 16 U.S. citizens and one Canadian, including an 8-month-old. Their Haitian driver also was abducted, according to a local human rights organization.

The leader of the 400 Mawozo gang had threatened to kill the hostages unless his demands are met. Authorities had said the gang was demanding $1 million per person, although it wasn't immediately clear that included the children in the group.