One day after we learned of the Roeper School's assignment that compared former President Barack Obama to primates, the school was closed. One parent we spoke with says she's outraged at how the school has responded.

BIRMINGHAM, Mich. (FOX 2) - On Wednesday, FOX 2 learned about a stunning assignment at a prestigious private school that compared former President Barack Obama to primates. On Thursday, the school was closed and we learned the teacher was placed on administrative leave.

The Roeper School is facing a wave of controversy after students in a high school biology class were given an assignment titled 'an introduction to primates' and former President Barack Obama's photo was listed. The assignment asked students to select from the gallery of photos which ones were primates.

Dr. Demi Karzanis sens her twin daughters to Roeper and said teachers should have done more to prevent this from happening.

"There is no excuse," Karzanis said. "Do your due diligence! Look at the ditto, or the handout you’re passing out. Did she think that was okay in 2022 in a woke school?"

FOX 2 learned the lesson originated from Duke University in 2010 and a link to the PDF was on the University’s website but disappeared Thursday afternoon after we stated asking questions.

"They think they’re beyond reproach because they’re a private school," Dr. Karzanis said.

The Birmingham private school prides itself on diversity and an alternative education, which costs up to $30,000 each year.

She said the school has been cryptic about the whole thing and is not doing enough to inform students and parents. 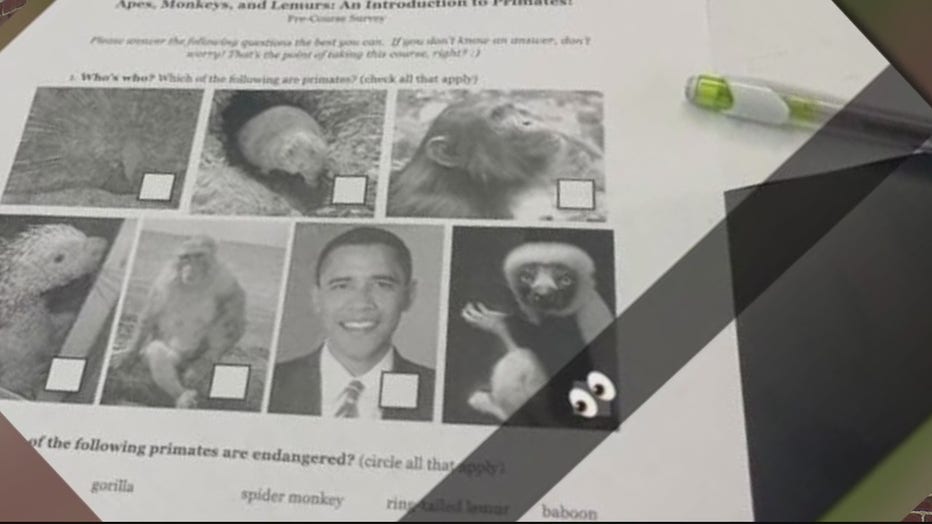 "And then your story broke alerting parents to what was happening and that’s really when we learned the details," Dr. Karzanis said.

After our story aired, the school sent a letter to parents alerting them classes would be canceled Thursday due to alleged threats to the Roeper community. The school reported the threats to police.

The school issued another apology email to parents and students and offered counseling if needed. It also promised more racial bias training for teachers.

"They knew. We didn’t even have to explain. They were outraged as well," Dr. Karzanis said.

A spokesperson with Duke University got back with us and said the school wasn't aware the document was online and was removed "immediately" once it was discovered.

"It appears the document was created in 2010 by two undergraduate students as part of an independent study course in evolutionary anthropology. To be clear, this was a student paper. It was never used as a lesson plan in a Duke class or by a Duke faculty member, nor was it promoted as a teaching tool."