DETROIT (FOX 2) - A security guard that some say has a "nasty attitude" is in jail after he allegedly shot at two customers - a wife and husband - Sunday night.

The incident happened around 6 p.m. at a supermarket on Joy Road near Greenfield, when an argument broke out between a 44-year-old woman and the guard.

A security guard at a supermarket on Joy near Greenfield Road fired his gun at a man and woman after an argument broke out between the two parties Sunday. Around 6 p.m., a woman started arguing with a security guard at the U.S. Quality Supermarket. She later called her husband where the three continued arguing. While both customers left the store, the security guard followed them. As the man got on his motorcycle, the security guard began firing at him. After firing multiple times, the woman pulled out her gun and was then shot in the face.

Happening at the US Quality Supermarket, the woman apparently called her 46-year-old husband after arguing with the security guard. When he showed up, all three of them continued to argue.

"If a wife has to call their husband for a situation, you're being disrespectful," said Forbes.

"That security guard had no business coming out of that store. Period. If you see the guy getting ready to leave, there was no reason to come out that store," said Forbes.

"Man, why did he shoot them?" asked Antone Reynolds, who lives nearby. "What was the reason for him shooting them? The guy didn't even have a gun."

Both victims ended up in the hospital and have undergone surgery. While the guard has a license to carry, police still arrested him. While some contend the guard is not aggressive and has never pulled out his gun before, others say he has constantly started unnecessary drama with customers. 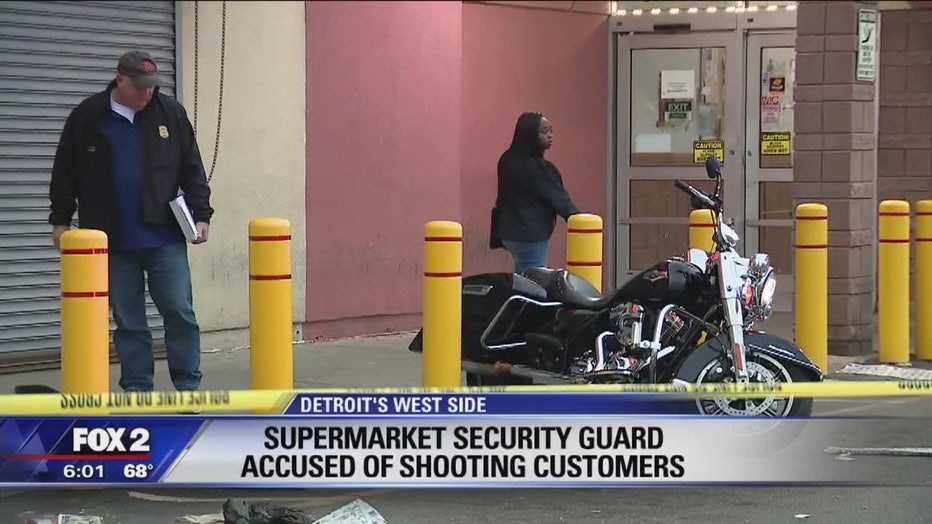 Both victims are expected to be okay and police say paperwork has been sent over to the prosecutor's office. They expect charges to be filed on Tuesday.