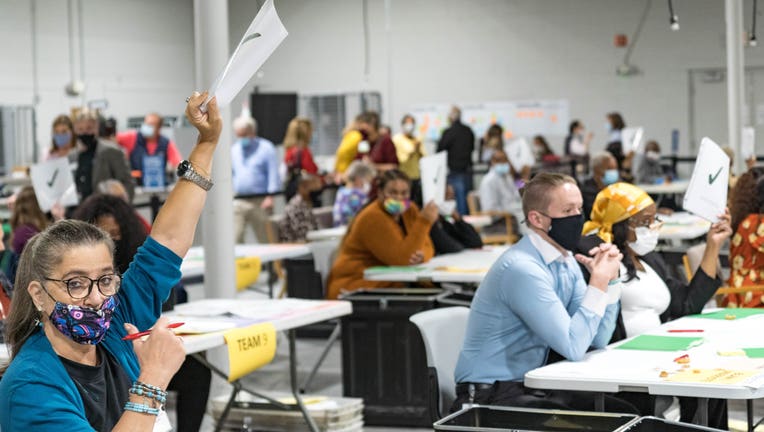 LANSING, Mich. - An investigation into Michigan's 2020 general election uncovered no evidence of fraud during last any of the races last November.

A lengthy 35-page report from the Michigan Senate Oversight Committee took an extensive look at the previous election and the many rumors that circulated regarding dead voters, intimidation, foreign interference, faulty vote-counting machines, and other conspiracy theories that spread during the election.

"This Committee found no evidence of widespread or systematic fraud in Michigan’s prosecution of the 2020 election," read the opening note from Republican Sen. Ed McBroom, the committee chair.

The report encompassed nearly 30 hours of public hearings, heard from 87 eyewitnesses, experts, and concerned citizens, reviewed 400 pages of testimony, and subpoenaed documents relating to Livonia and Detroit, where false allegations of voter fraud spread shortly after voting had stopped.

A letter from McBroom at the beginning of the report notes that any compelling theories about election fraud from Wayne County to Antrim County "are diminished so significantly as for it to be a complete waste of time to consider them further."

The report is the latest in a series of audits and reviews of the 2020 election that were conducted by the Department of State, which came to the same conclusion.

Here's what else the report found:

Neither issue constituted fraudulent election activities, according to the report.

There were also claims of people who didn't live in the state who allegedly voted in the Michigan election. Those also turned out to be false.

The committee received claims of dead people voting in Grand Blanc, previous residents of Jackson now living in Louisiana that thought they saw documents showing they had voted, and a list of 200 people in Wayne County believed to be dead who had voted.

The committee found no votes were cast in the first two examples. Regarding the list, " A thorough review of individuals on that list showed only two instances where an individual appeared to have voted but was deceased."

The examples included a 118-year-old man whose son has the same name and lives in the same residence - a clerical error - and a 92-year-old woman who died four days before the November election but was found to have cast an absentee ballot.

The committee also commended clerks from the Secretary of State for removing approximately 3,500 absentee ballots submitted by voters who were alive but died before election day.

The committee received several claims that challengers from the Republican party had been removed from polling locations without cause and weren't allowed to return to counting rooms. Further testimony about those accusations "contradicted some of these statements and provided a different viewpoint."

Several issues relating to the challenges of the pandemic and public health concerns were driven by COVID-19 and "will not be relevant again."

The committee said the duties and responsibilities of poll watchers and challengers must be better understood and reinforced during training.

"Obtaining the proper ratios of partisan workers is of critical importance, especially ones from the local area."

RELATED: Benson says 2020 election was Michigan's "most secure" in history

Much of the accusations of harassment investigated by the committee came from inside the TCF Center, where Wayne County was counting absentee ballots that weren't tallied the day before. Confusion and a misunderstanding of the duties of poll workers and challengers led to "chaos" occurring inside the building.

Issues were furthered after Republican officials put out a call for members to "descend on the location" to stop vote counting. The response from workers to cover windows, call police, and deny lawful challenges were responses that "seem necessary to them at the time."

The committee recommended updating requirements for challengers while clerks and parties should do a better job of recruiting adequate workers and provide better training. It also recommended the Wayne County Republican Party "issue a repudiation of the actions of certain individuals that created panic" inside the building.

A familiar problem that many Michigan voters took with the 2020 election was the mailing of absentee ballot applications to citizens that hadn't requested one. The decision was made by the Secretary of State in response to the pandemic as a means to make it safer to vote.

However, reports of dead family members receiving the applications left some people upset by the unsolicited mailing. People that received those ballots were selected from a list that contained dead voters that had yet to be purged.

While a judge determined it was legal for Sec. Jocelyn Benson to send the applications, emails that were obtained via subpoena from the committee showed the department had communicated with a group that targets young people that has "left of center political leanings."

A review from the committee found "there was no evidence" those ballots were issued to Michigan voters. However, it did recommend the secretary of state stop sending absentee ballot applications that aren't requested.

The report also mentioned the difficulty of casting an absentee ballot fraudulently.

"While the act of obtaining and submitting the ballot of another individual is not impossible, committing voter fraud in this manner undetected is unlikely, as the Qualified Voter File would immediately have a notation of the vote for the voter and the second attempt to request a ballot or to vote would not be allowed without investigation and explanation."

It was a series of clerical errors that started before the November election that led to several thousand votes getting switched from Donald Trump to Joe Biden in Antrim County - a normally reliably Republican voting bloc.

However, conspiracy theories spread quickly in response to the vote switch that added evidence Michigan votes had been taken from Trump. "However, this claim is inaccurate" read the committee's report. The correct count of ballots was later fixed and then validated after a complete hand recount of the ballots was done.

In the wake of the error, the committee said a forensic audit of the county offered people a "misrepresentation of facts" that misled citizens who believed the election results were being changed over the month after the election.

The committee said it was "appalled" by the dismissal of proof about voting in Antrim County by the forensic review.

In further comments of the company that conducted the review, known as the Allied Security Operations Group, the committee lamented the actions by the company and argued its conclusions to be "misleading and irresponsible" and led to misinformation and false claims about the technology used to count ballots.

"The many hours of testimony before the Committee showed these claims are unjustified and unfair to the people of Antrim County and the state of Michigan," it concluded. "It has also been unfair to people across America."

Another claim investigated by the committee were accusations that a wagon that brought tens of thousands of ballots to Wayne County to be counted after election day, which eventually led to Michigan flipping from Trump to Biden.

They allegedly arrived between 3-5 a.m. However, a senior elections advisor for the city of Detroit said that an estimated 16,000 ballots were delivered to the TCF Center around that time. They were ballots that had been submitted throughout election day at different locations like in drop boxes.

But a photo that circulated online accused someone of secretly delivering the ballots to the center. It turned out to be a media photographer hauling his equipment.