DETROIT (FOX 2) - A 9-year-old Detroit girl was diagnosed with a cancerous mass in her brain.

Her mother, Ashley Young, is at her daughter's side as she battles the illness, which has made it impossible to make ends meet and give her the care she needs.

Ashley Young and her daughter Gabby Zaveta went to the hospital on New Year's Day, revealing her daughter had neuroblastoma

"She was sleeping more and not eating as much as she was," Young said. "So we took her in, I didn't know what was wrong."

Ashley Young and her daughter Gabby Zaveta went to the hospital on New Year's Day, revealing her daughter had neuroblastoma - a tumor in her brain.

"Chemo because they didn't want to cut it out because of where it is, it is in the middle of the brain where everything functions," Young said. "So if they cut it out, it may impact something else and she already has a learning disability."

You can't tell by her smiling photos - but Gabby is cognitively impaired and has suffered from epilepsy since she was a baby. She is recovering from shunt surgery to drain the fluid from her brain.

Sadly, doctors at Children's Hospital in Detroit suspect the cancer may be in other places because neuro blastoma normally originates in the abdomen. They are anxiously waiting more test results.

Young just wants her daughter to be okay. And this news comes at a time when the single mother of two is already struggling. She was forced to move into a Detroit house with eight other people, where there is no working furnace.

A space heater where all three sleep, is all they have to stay warm. Since Young quit work to care for Gabby, a friend has started a GoFundMe page to help her afford transportation to the hospital, rent and keep the lights on and also help pay for what insurance does not.

Mom says Gabby is a fighter. As they prepare her for chemo and the tough battle ahead, any help would be appreciated.

"For her to get better and get back to herself, whatever she needs or wants because she's been through a lot," Young said.

TO DONATE: Go here for the family's GoFundMe page. 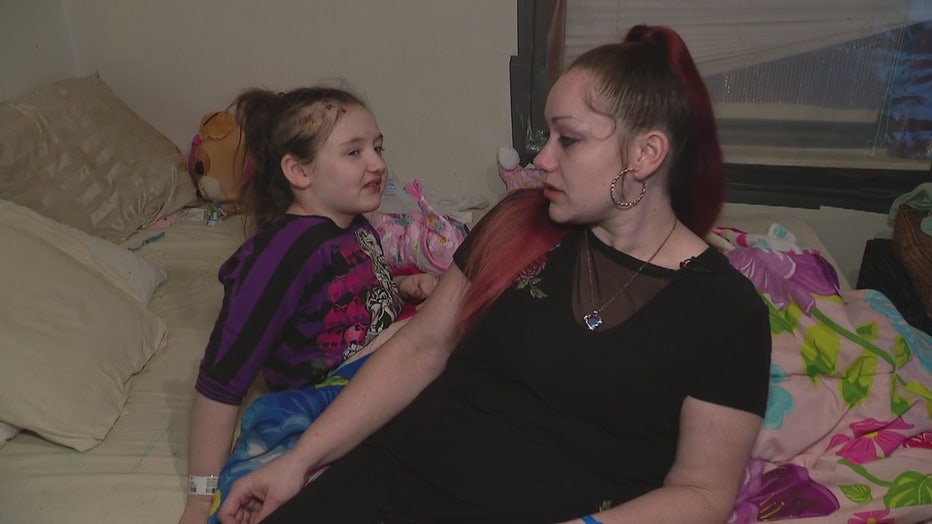 Ashley Young and her daughter Gabby