DETROIT (FOX 2) - The United States Adult National Champion Daniel Palmeri is used to figure skating in front of big crowds. But that all changed when the coronavirus pandemic hit.

"It’s been a tough year for everyone," he said.

Skating star Daniel Palmeri is among the skaters across the country - including metro Detroit - who have been raising money to fight cancer. His efforts hit close to home.

But what hasn't changed, is the Rochester man's drive to give back. Palmeri is among the skaters across the country - including metro Detroit - who have been raising money to fight cancer. His efforts hit close to home.

"My aunt is going through lung cancer right now, along with everything else happening in the world with Covid," he said.

This is all part of "Sk8 to elimin8 cancer, " an event put on by the Scott Hamilton Cares Foundation and the Downtown Detroit Partnership.

Skaters of all ages collect donations then participate in ice shows in their communities. Hamilton, a world champion and Olympic gold medalist says the Cares Foundation, like other non-profits, had to make changes because of COVID-19.

For example in Detroit, Thursday night's ice show at Campus Martius is closed to the public. But while this year is different, they are still raising awareness and money.

"Cancer is the number one cause of death and something that touches us all in profound ways. I lost my mother and I’m a survivor and I just know we can do better," Hamilton said. "The science is up here, the money is down here we just need to close that gap."

The Cares Foundation has raised millions for cancer research and over the past three years, the Karmanos Cancer Institute has also received more than $5,000. 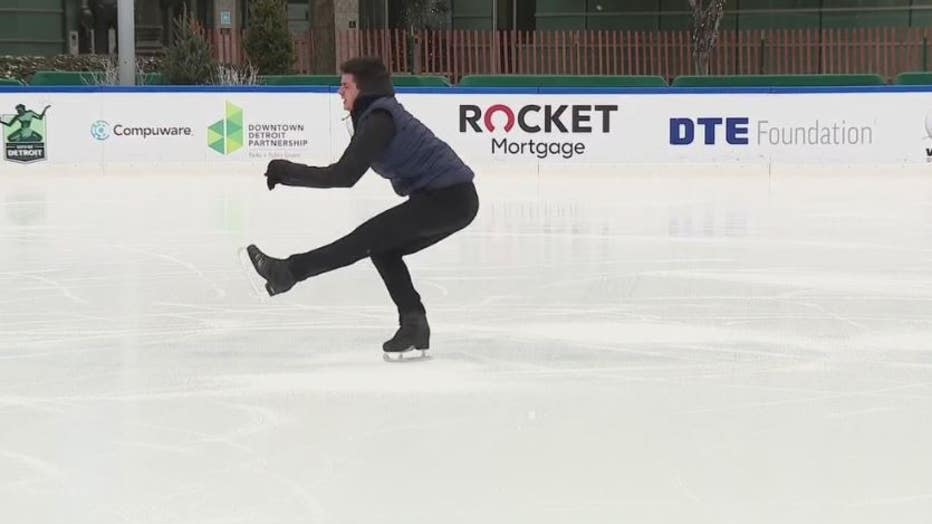 "The donations from this event will go to groundbreaking research that happens at the Karmanos Cancer Institute," said Mary Ellen Kearney. "We are so proud of our partnership with Wayne State University and to be able to provide outstanding research, which then leads to exceptional patient care."

So while this year's Sk8 to eliminate cancer looks different, Palmeri says it doesn't matter how many people are in the crowd. What matters more, is what they're skating for.

"It’s been hard emotionally, physically for everyone, so tonight I’m just so excited to have the opportunity to perform and to support an organization that so near and dear to my heart."

If you want to donate, you may do that even after Thursday's ice show. Go HERE.