SOUTHFIELD, Mich. (FOX 2) - It's well-known that blood donations save lives but that not just true for people -- but for our pets too.

Bluepearl Specialty and Emergency Pet Hospital in Southfield has a small army of donors like Riley. She's a rambunctious pup - a pitbull excited and eager to please, but she's also considered a hero. Riley's a frequent blood donor helping to save other dogs.

How your pet’s blood could save another animal’s life

It's well-known that blood donations save lives but that not just true for people -- but for our pets too.

"It's life-saving when they need it - there's nothing other than blood that will replace blood," said Dr. Jessica Romine.

She says there are a number of reasons a dog or cat could need a blood transfusion, like an injury such as being hit by a car, a bleeding tumor, immune disorders or bone marrow problems.

"The blood transfusion buys you the time to address the problem - it itself is not the cure but it's the essential component. No medication is going to work if we critically need red blood cells," Romine said.

That's why it's so important to have dogs like Riley as regular donors.

"Seeing her blood being taken right away and used, it just fills my heart to see that she's helping other animals and helping another pet owner to have their babies here," said Riley's mom, Amanda Speher.

Amanda works at Blue Pearl and she's one of several employees whose pet dogs and cats keep replenishing the pet blood bank. They even have their own wall of fame.

Romine says each donor dog or cat has to be fully screened regularly to make sure they're healthy. Dogs and cats each have different blood types so compatibility is critical. 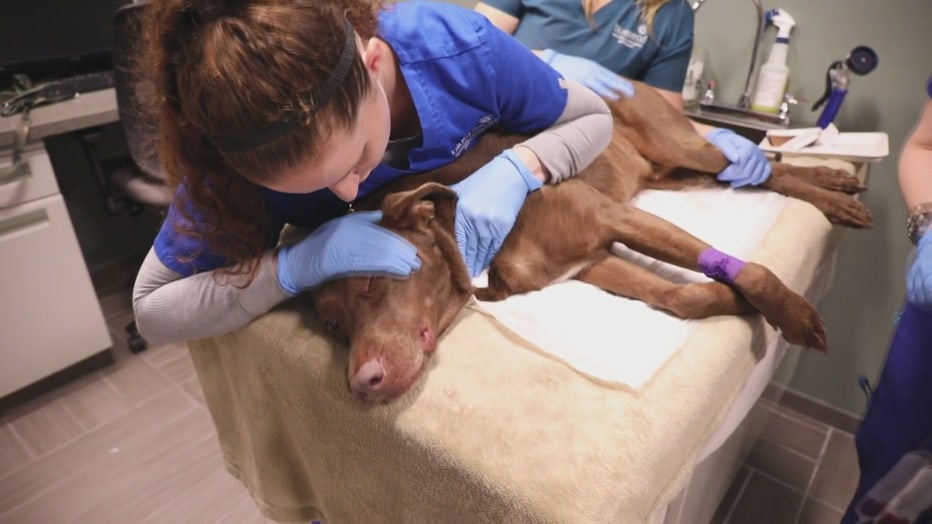 To donate, dogs have to be 1 to 7  years old, healthy and weigh more than 50 lbs. Cats must weigh more than 10 pounds, live indoors and be 2 to 7 years old. As for the donation process, it's a lot like the process for people -- it takes about 15 minutes and after, the pets get a bandage and, of course, a snack.