A snatch and grab attempt in southwest Detroit is being investigated as a possible mistake by thieves that had busted a hole through a dollar tree. Police took photos of a nearby semi-truck and are considering whether the suspects broke into the wrong building.

MONDAY NEWS HIT - Detroit police are investigating a snatch and grab on the city's southwest side after thieves busted a vehicle-size hole inside a Dollar Tree.

Police cruisers and investigators were outside the Vernor business for several hours Monday morning after finding toppled bricks and drywall in the back.

Officers suspect the thieves had actually missed their target and had intended to get into the Foot Locker nearby.

Instead, they broke into a Dollar Tree. It's unclear if they stole anything.

The snatch and grab attempt happened in the 1600 block of Vernor, at a strip mall between Military and Dragoon Street. Five businesses are located in the area, including a Dollar Tree and Foot Locker.

Police have also towed away a semi-truck parked nearby that was suspected of being involved in the crime.

No visuals of the suspects had been released as of early Monday morning.

President Joe Biden is coming to Michigan this week to build up momentum for his infrastructure bill that's still in Congress.

According to a news release from The White House, the president will be traveling to Howell, Michigan to "continue rallying public support" for his Build Back Better campaign. More details are expected to follow the expected visit Tuesday, October 5.

While the first form of meaningful legislation pertaining to the country's lagging infrastructure in years, the trillion-dollar bill is still getting work through Congress.

Its status is in limbo in the U.S. House where a tug-of-war between progressives and moderates in the Democratic wing debate just how big the bill could get. While some have sought as much as $3.5 trillion in new spending, others have combed the money amount down to $1.5 trillion. The new spending would address climate change and the social safety net in the country's infrastructure.

Gas prices fell in Michigan from last week down to $3.21 for a gallon of regular unleaded gas. It's 1 cent less than last month but still $1.09 more than this time last year.

Michigan motorists have been paying about $49 for a hypothetical 15-gallon tank of gas for much of the summer. This week's estimation puts the same amount at $48. According to the Energy Information Administration, gasoline stocks rose slightly while demand also ticked up by half a million barrels produced per day. The cost for a gallon of gas in Metro Detroit is around $3.26.

It signals "supply and demand are largely in sync" according to a release from AAA.  Although crude oil prices increased against a weakening dollar, they had previously fallen earlier in the week following a report about an increase in inventories.

"With supply and demand largely in sync, motorists are beginning to see some stability at the pump," said Adrienne Woodland, spokesperson, AAA-The Auto Club Group. "While this trend will likely minimize fluctuations, high crude prices will keep gas prices elevated through this week."

Farmington Hills police say they have arrested a mother and father after their 18-month-old son was found dead.

The police chief said officers started at a Motel 6 on Grand River and 10 Mile.

The grand prize winner of ArtPrize is an old phone booth on a pedestrian bridge in Grand Rapids. Not just any phone booth. "Before You Go" allows people to listen to advice about life recorded by more than 100 local residents and others.

The mother-son team of Monica Pritchard and Christian Reichle won the $50,000 prize Friday. "I’ve just had a passion for telling peoples’ stories in terms of business, and I’ve been sharing that with my son," said Pritchard, who works as an executive sales coach. "Christian helped me make it come alive."

She said she and her son didn’t enter the competition to win it. "You pour your heart into something, and you don’t know how it’s going to go," Reichle said. "To have the reception that we had, and then to win, is huge." 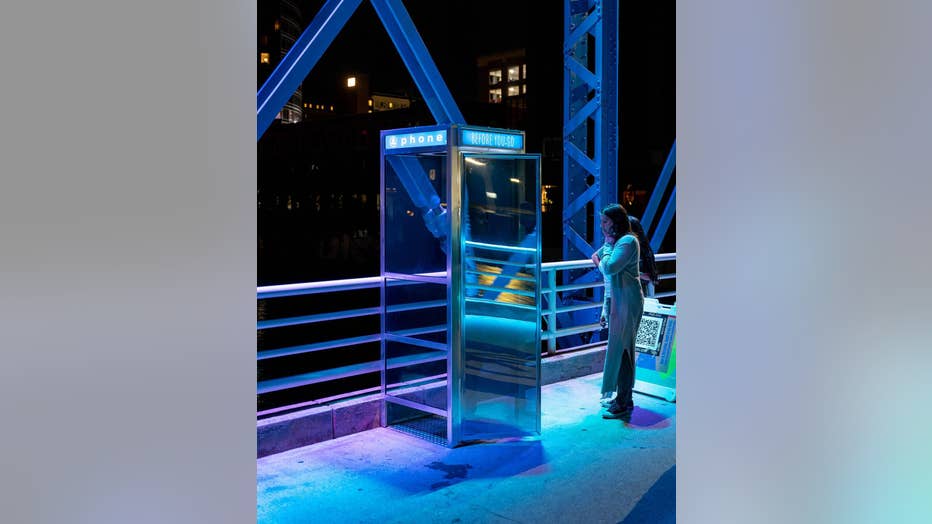 ArtPrize ends Sunday, but people still can experience "Before You Go." The phone line where the messages are recorded can be accessed by calling 1-(888)-665-2036. For 18 days, a variety of art was displayed in parks, museums, galleries, vacant buildings and other venues.

More rain is expected Monday after a wet end to the weekend yesterday. Temperatures should still reach the 70s by mid-to-late afternoon. Southeast Michigan residents should expect similar conditions throughout the week.

Showers continue on and off through Monday as a warm week continues.

Nobel Prize awarded to US scientists for discovery of temperature, touch receptors

The Nobel Prize in the field of physiology or medicine has been awarded to U.S.-based scientists David Julius and Ardem Patapoutian.

They were cited for their discovery of receptors for temperature and touch. The winners were announced Monday by Thomas Perlmann, secretary-general of the Nobel Committee.

Patrik Ernfors of the Nobel Committee said Julius, 65, used capsaicin, the active component in chili peppers, to identify the nerve sensors that allow the skin to respond to heat.