Police were called a little before 3 p.m. on Saturday to a report of a man live-streaming his attempted suicide on Facebook Live.

Sterling Heights Police Officer Shawn Birch raced to Lakeside Pond Saturday where he would save a man trying to take his own life.

Caller: "One of my first cousins on Facebook on live, he posted on live like 'Goodbye' and he's in the woods, probably trying to commit suicide."

Sterling Heights Police Chief Dale Dwojakowski says the suicide attempt was being live-streamed on social media.  Officers first responded to Dodge Park but found no one.

Quick thinking prompted them to ping the man's phone to find his location, leading officers to the area of Lakeside Mall.

"The officer who works that area knew there was not a large wooded area except for one spot: it's an island in the middle of Lakeside Pond," said Dwojakowski.

A woman flagged down Officer Birch the moment he arrived.

"Our officer ran across the bridge into the wooded area and right when he got there he saw the guy hanging," the chief said. "He instantly grabbed him, lifted him up as good as he could, took out his pocket knife, cut the noose down and got him down to the ground and miraculously the guy ended up living.

"Thirty seconds, one way or the other, this guy is not going to make it."

Police say the man was taken to a local hospital while 20-year veteran officer Birch was lauded for his heroic efforts. 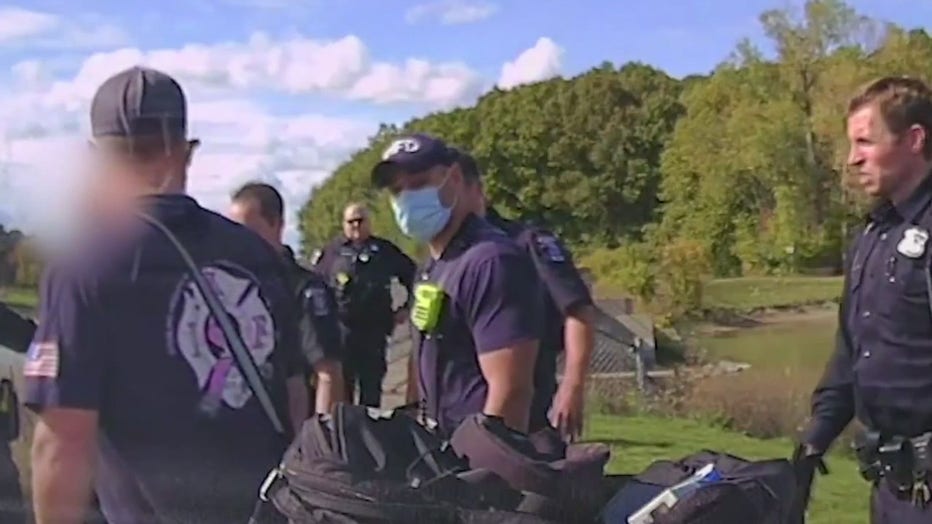 Sterling Heights police officers and other first responders help the man in crisis.

"He has already been written up for a lifesaving award and well-deserved," Dwojakowski said.

Psychiatrist Dr. Gerald Shiener says fall is a peak season for suicides and the pandemic has the potential to make things worse. He says there are red flags to be on the lookout to get loved ones the help they need.

"The warning signs would be someone who isolates themselves," he said. "Someone who doesn't return phone calls, someone who's given up on hobbies and stopped exercising, they stopped playing golf, they stopped reading books, they withdraw from other people. You talk to them and they can't make conversation and the answer to seeing those warning signs is first of all asking. You can't put ideas in someone's head and you can't hurt someone by asking the question: 'Are you alright? I'm worried about you.'"