Camera captures officer being dragged by car as driver speeds away

Officer Kieron Poole said his encounter with Muhammad Nadeem was quite friendly at first, but things escalated once he mentioned cannabis. (Credit: West Midlands Police via Storyful)

WEST MIDLANDS, United Kingdom - When police in the U.K. showed Muhammad Nadeem the graphic bodycam footage of his January 2020 arrest, even he had to admit the incident "doesn’t look good."

The West Midlands Police Department released the video on Thursday showing Nadeem drag Officer Kieron Poole alongside his car, despite the officer’s repeated commands to stop.

Nadeem, now 19, has admitted to the crimes caught on camera and is awaiting sentencing, police said in a news release. They added he was "shocked" when shown the footage and admitted it "doesn’t look good."

The video shows Poole questioning Nadeem, who was sitting in a car with the windows down despite cold weather. Nadeem told Poole he was smoking cigarettes, but Poole said he could smell marijuana.

Once Poole mentioned cannabis, Nadeem cranked up the engine and sped off with Poole still dangling from the driver’s side window, authorities said. 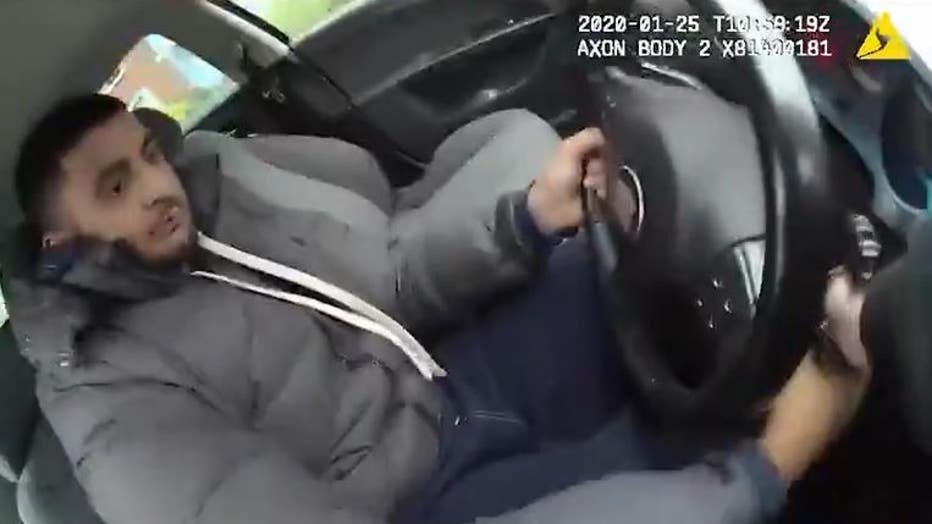 Body camera footage shows Officer Kieron Poole reaching for the keys while a suspect drives off, dragging Poole with him. (Credit: West Midlands Police via Storyful)

"It all happened so quickly," Poole said in the news release. "Before I knew anything my arm was attached to the car and I was being propelled, hanging on the side, through a couple of branches, a good 20-30 feet before I knew what was happening."

Poole shouted for help, fearing he would fall under the wheels and die as the car sped away.

"I shouted ‘Stop! Stop," but he wasn’t paying any attention," Poole recalled. "I knew I had to get the key out of the ignition."

Eventually, Poole succeeded and chased Nadeem on foot into a dead end, where the pursuit could have ended.

"I instinctively chased him. He was cornered and I was hoping he’d give up. Instead, he decided to rush towards me with a bottle and quite forcefully hit me at the side of the head with a plastic bottle. My adrenaline was going so I felt like I could carry on trying to pursue him," Poole explained.

For five more minutes, Poole ran behind Nadeem, even dashing across a busy road at one point. Eventually, the pursuit slowed to a walk.

At this point, Poole was nursing a bruised arm. Since he had been assaulted already, Poole kept his distance and waited for backup to arrive. 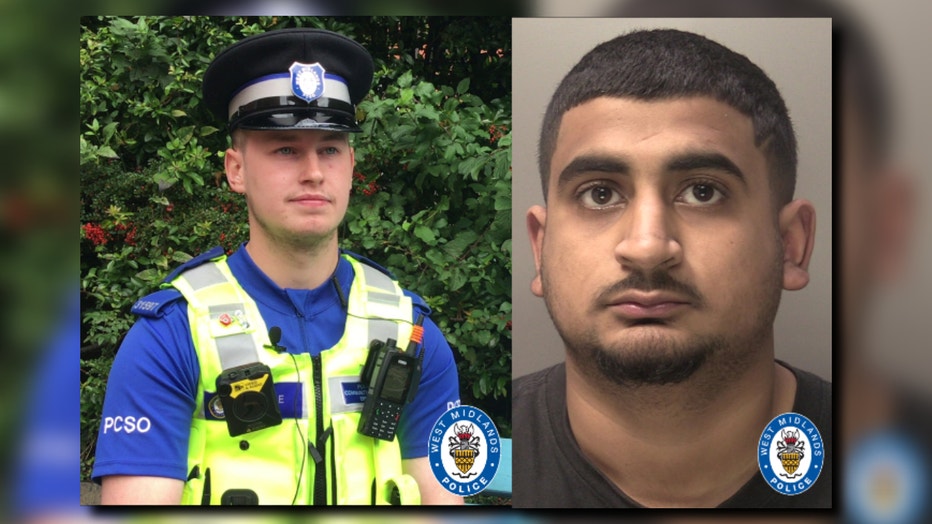 Officer Kieron Poole (Left) said his encounter with Muhammad Nadeem (Right) was "quite friendly at first," but things escalated once he mentioned cannabis. (Credit: West Midlands Police via Storyful)

I’d like to thank the quick response of the neighbourhood officers who arrived within minutes to help me," Poole said.

Poole returned to the parking lot where the incident began to retrieve his hat, which had fallen off amid the struggle.

Upon examining Nadeem’s car, investigators found an ax and a hammer. Nadeem also had a small amount of cannabis on him.