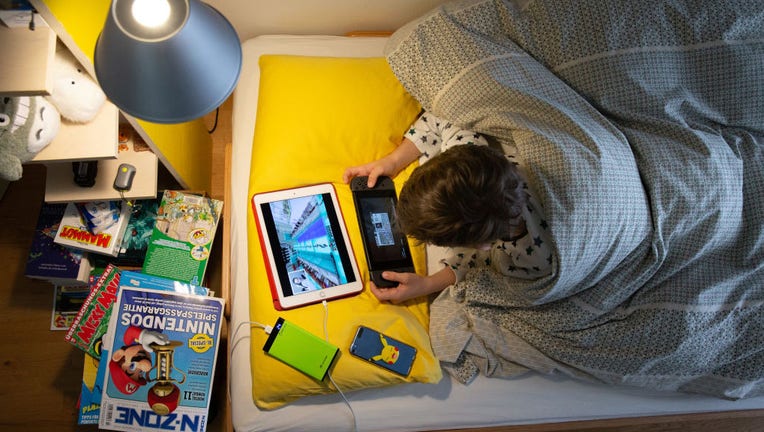 FILE IMAGE - A child lies in bed and plays a game on a game console in an image dated Feb. 25, 2019. (Photo by Ulrich Perrey/picture alliance via Getty Images)

Summer is fast approaching for many American families with children. While the break from school can symbolize more opportunities for vacations, camps, pool fun, and neighborhood play, it can also mean less structure and potentially more screen time.

"I think summers historically have always been hard for parents because you have work, and you don't have school," said Laura Linn Knight, author of the new book "Break Free from Reactive Parenting" and former elementary teacher.

"It’s definitely a predicament that parents get into. How do I have my kids at home, and also work? And I need to keep them safe. Can I just have them outside riding bikes and unsupervised? We don't really live in that kind of culture anymore, and it's a really hard place to be," she added.

Knight, who is also a mother of two kids ages 7 and 9, noted how not all recreational screen time is alike and parents must decide what’s a good fit for the values in their home. Some can be beneficial for kids, such as FaceTime chats with loved ones or educational gaming apps and shows, but much depends on their age, the content, and duration.

One way that Knight’s family tackles this topic is by creating a "summer boredom plan," one of several tools to help reduce the power struggles around screen time in the home. Together, the family brainstorms all the acceptable activities kids can do when they’re bored and writes them out on a poster that’s taped to the wall, titled "My Activity List."

"It’s another time to sit down with kids and say, ‘Hey, there's going to be times this summer that you're going to feel really bored, you know? And what can we do? I know, sometimes we can play video games and sometimes we can watch TV. But we know that that's not good for our bodies and our brains to do that all day long. So what are some alternatives?'" Knight explained. "Let's make a list of it now, and make sure that we have those in place."

Between the internet, television and video games — screens all compete for children’s attention. The American Academy of Pediatrics (AAP) says children spend an average of seven hours a day on "entertainment media," such as televisions, computers, phones, and other electronic devices.

Furthermore, the COVID-19 pandemic seems to have fueled screen time among children. Before the pandemic, six out of 10 U.S. parents said their children spent no more than three hours on devices. By August 2020, seven out of 10 estimated that their kids spent at least four hours with screens — with games being the most prevalent type of content overall, according to data shared by Morning Consult.

The AAP, made up of pediatricians across the U.S., recommends that parents of kids and teens try to implement consistent limits on screens. It suggests developing personalized plans, similar to Knight’s idea, while taking into account each child’s age, health, personality, and developmental stage.

On its website, parents can create a "Family Media Plan" and even calculate the time during the day for physical activity, sleep, and other categories.

"Not all screen time is the same. Teens are more independent, but it's still up to parents to decide how (and how often) their teens use screens," says KidsHealth, an educational site for parents. "Teens may need to spend more time online doing homework but they may also spend a lot of time on social media, playing games, or watching TV and videos."

For the youngest children — those under 18 months — the American Academy of Pediatrics says the use of screens should be discouraged other than video-chatting with loved ones.

Parents of kids 18 to 24 months of age who want to introduce screens are encouraged to choose "high-quality programming/apps and use them together," the AAP says, noting how this scenario is how toddlers learn the best.

For kids older than 2 years, media limits are "very appropriate," the AAP says. It recommends that parents limit screen use to no more than 1 hour or less per day of "high-quality programming."

What should kids be doing instead of screen time?

But during the tweens and teenage years, when kids are sure to start spending more time in front of screens between personal cell phones, video games, and at friends’ houses, the screen time suggestions and enforcement can become more challenging.

In Knight’s household with elementary-age children, their family currently doesn’t allow screens during the weekdays but does allow one hour of video game time on Saturday and one hour on Sunday — in addition to watching a show or a movie. They also often watch a Friday family movie together.

Knight noted how as the kids get older, screen time use has become more challenging with friends’ households having different rules. She and her husband first came to an agreement and also utilize another tool, which she calls a "Family Values" chart, to help the family collectively discuss what they all value.

‘Examining our own relationship with screens’

While setting household rules on screen time use can help, many note how parents’ own screen use can play a role.

Research has suggested that parents with high screen use themselves are more likely to fail when it comes to imposing similar restrictions on kids.

Role-modeling healthy screen time can include setting aside some phone-free time each day in order to be more "in the moment," turning off the TV during meal times, and waiting to check a phone notification until after a conversation with the child is finished.

"I think a lot of parents have their own addiction," Knight said, noting how many check their phone first thing in the morning and the last thing before bed.

"How many places are we just constantly like walking around and running into things almost because we're looking at a screen, and then our kids see that. And of course, they want to do it too," she continued. "So I think part of this is examining our own relationship to screens, and then being able to support our kids as they're developing their relationship to screens."

Tips to regulate screen use this summer: ‘It’s totally OK to be bored’

When considering screen time use, setting a realistic summer plan is all about balance, planning and communication.

"We have an open conversation, and we talk about the reasons behind why we do things. It's less authoritarian, and there's even more buy-in, if you will," she said. "He can understand why we make the choices we make. He doesn’t always like it, but he can understand it."

"I think parents, we often fear the tantrum or the meltdown around it, but we don't have to," Knight added. "It's totally okay to be bored."