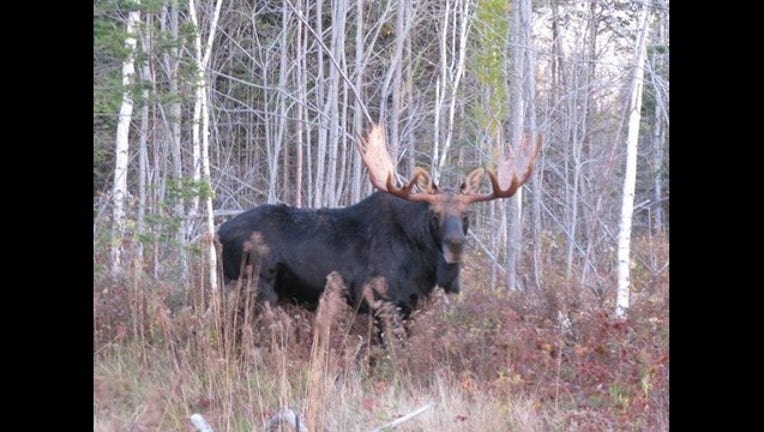 TRAVERSE CITY, Mich. (AP) -- The moose population in Michigan's western Upper Peninsula appears to have dropped over the past two years and there's reason for concern about the species' future in the state, an expert said Monday.

The latest biennial survey by the Department of Natural Resources produced an estimate of 323 moose in their primary Michigan range, which includes Baraga, Iron and Marquette counties. If correct, that would be a decline there of about 28 percent from 2013, when the estimate was 451.

Because of statistical uncertainty, it's possible the population has held steady since the 2013 count, said Chad Stewart, a deer, elk and moose management specialist with the DNR. But other findings, including a decrease in the number of calves spotted with adult females, suggest a decline is the likelier scenario.

It is "quite possible that we're looking at a considerable drop in numbers," Stewart said.

A smaller moose herd wanders the eastern U.P. Biologists have long estimated their number at around 100.

But that area is not included in the biennial survey, in which scientists fly designated routes over prime moose habitat and count animals from the air. The numbers they spot are plugged into a computer modeling program to calculate the estimated population.

Moose are native to most of Michigan but had largely disappeared by the turn of the 20th century because of logging, over-hunting and disease produced by a parasite called brainworm. The present-day western U.P. population is descended from 59 moose that were moved from Algonquin Provincial Park in Canada in the mid-1980s.

Officials hoped the herd would reach 1,000 and allow sport hunting, but its numbers have fallen well short and no hunting season has been scheduled.

Even so, surveys since 1997 turned up regular population increases of about 10 percent. Beginning in 2009, the growth rate slowed to about 2 percent.

Now it appears to be dropping.

"It might not happen in our lifetime, or our children's, but we have to face the possibility that there might not be a wild moose population in Michigan," Stewart said.

Scientists are not certain what caused the apparent decline over the past two years, he said. Bitter cold and heavy snow the past two winters is one possible culprit. Also, wolves increasingly may be targeting moose because of falling deer numbers, although Stewart said there's no hard evidence of that.

But in the long term, a warming climate may be the moose's biggest enemy. Blood-sucking ticks thrive under such conditions. Thousands can attach themselves to a single moose and weaken the hulking beast.

"It's not a very healthy prognosis for them," Stewart said.