DETROIT (FOX 2) - After an almost 30-hour standoff with Detroit police, a suspect who had barricaded himself in his home died from a self-inflicted gunshot wound.

The 38-year-old man who had held two adults hostages and had been at a standstill with police since early Tuesday morning.

A man who was found dead after a 30-hour standoff with Detroit police this week earlier had talked to FOX 2, while barricaded, about confessing to a triple murder earlier this summer.

Police say the suspect, who was believed to be involved with several other violent crimes including a triple homicide from June 2020, was found with a gunshot wound around 7:05 Wednesday morning.

"He was up and down, calm at one point, just having casual conversations with them (negotiators) then very agitated moments later yelling and screaming into the phone, " said David Levalley, an assistant chief with DPD.

Police said the second of two hostages had escaped the house around 6 a.m. after the suspect had fallen asleep. The first hostage had her release negotiated on Tuesday.

What started as an attempted traffic stop in Redford Township around 2:30 a.m. turned into a police response in the Brightmoor neighborhood that involved more than 100 officers. It ended after police saw the suspect motionless on the ground.

"We could see the individual lying in the living room area. Our officers deployed a flashbang at that point to try and make a determination whether or not the individual was sleeping or lying in wait or had taken his own life," said Levalley.

The suspect initially fled police after he failed to obey an order to pull over after running a red light. Instead, he drove to his home on Iliad Street near Fenkell. It was believed he was under the influence of narcotics and possibly alcohol at the time. There were also two adults in the home that he took as hostages. 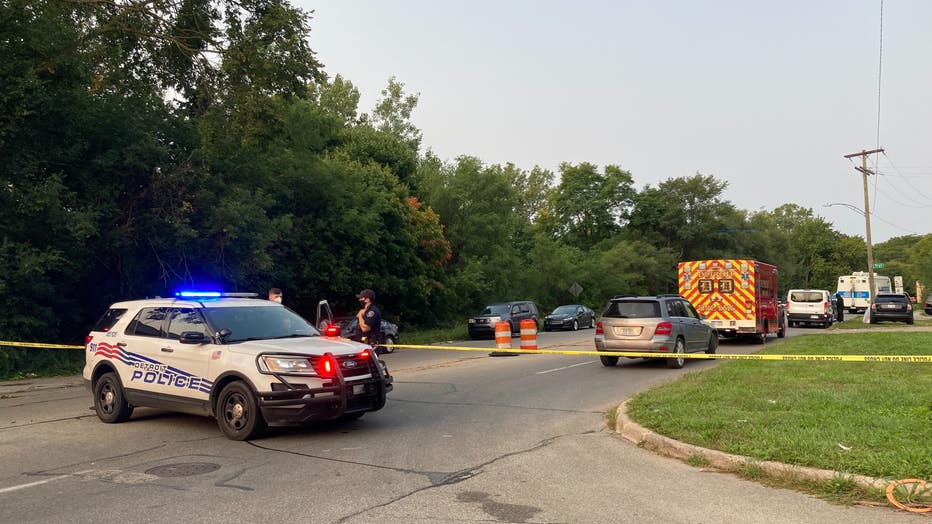 Police had deployed several special forces outfitted in tactical gear and armed with sniper rifles to monitor the home since early Tuesday.

Detroit Police Chief James Craig said yesterday that through conversations with negotiators, the suspect acknowledged he was a suspect in a triple homicide investigation from last June when three bodies were found in a home that had been torched.

A medical examiner discovered bullet wounds in the bodies, leading police to believe the first was a cover-up.

In a conversation with FOX 2's Charlie Langton during the standoff, the suspect, who's been identified as Thomas Michael Curry, confessed to the triple murder.

"I literally killed three people, three months ago on Helen Street behind the Highwaymen clubhouse. I confessed to it. Detroit Highwaymen ordered me to do it and then turned in evidence against me to the police to try to hang me up for the crime," he said in a video phone call.

Both victims that were held captive had been checked out by emergency medical services once they were released or escaped.

The armed suspect who had barricaded himself in his home for more than 24 hours died after he shot himself Wednesday morning. The hostages who he had confined are safe.