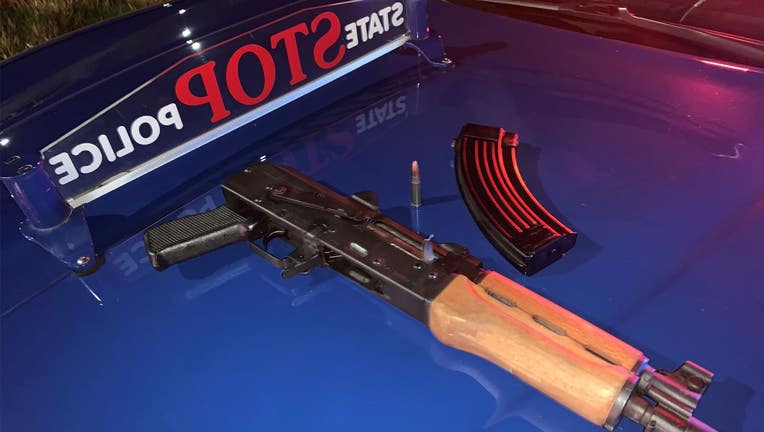 An AK-47 pistol on the hood of a state police car. Photo via Michigan State Police

SOUTHFIELD, Mich. (FOX 2) - State police arrested a man driving over a hundred miles per hour on a Metro Detroit freeway while impaired.

During a search through the suspect's vehicle, police also found a loaded AK-47 pistol.

Michigan State Police patrolling the freeways early Friday morning conducted a traffic stop on I-696 in Southfield after a vehicle blew by the trooper going 102 mph in a 70 mph zone.

According to police, who conducted the stop in the westbound lanes near Telegraph, the driver, a 35-year-old man was slow to stop.

While slowing down, police observed the suspect placing items in the backseat of his vehicle. Once stopped, the trooper could smell the odor of intoxicants coming from the driver, prompting a request to perform sobriety tests.

The driver subsequently failed the tests and was arrested, according to tweets from state police.

MORE: Driver weaves in and out of traffic, causes crash before shooting at van in Sterling Heights

While searching the suspect's vehicle, a trooper found the firearm, which had a loaded magazine and one round chambered.

The driver was lodged at Oakland County pending prosecutor review.