CENTER LINE, Mich. (FOX 2) - A man is in critical condition after being shot outside a bar in Center Line. But as police investigate a motive, the suspect was found dead by suicide.

The detective working the case said he has never seen anything like it - a person suspected of shooting someone he was eating and drinking with - even buying people drinks picking up tabs.

Suspect in shooting outside bar kills self

A man is in critical condition after being shot outside a bar in Center Line. But as police investigate a motive, the suspect was found dead by suicide.

The two went out of the bar to smoke together when something went wrong.

"At first I was like is this real, then I saw the blood coming from between his fingers so then I immediately called 911," said a server.

A patron at the Te Roma Grill and Beergarden in Center Line had been shot, allegedly by someone who had been sitting at the bar next to him for hours.

"I went to check because he had an open tab and I was smoking outside with the shooter," the server said. "The victim said If he doesn't cover it, I'll cover it. He was buying everyone drinks, the shooter was."

Not only that, the bartender who was there Tuesday when it happened, said the 33-year-old suspect had large bills and said he won the lottery. He reportedly bought expensive vodka and steak and tipped well, too.

"He handed me $100 and told me to keep the change," the server said. "OK, if you are handing out that kind of money I am going to believe you won the lottery."

Before 9 p.m. both the victim and suspect made their way outside - but not at the same time. No one inside saw what happened and police say surveillance didn't capture it either.

FOX 2: "Did you see anything bizarre or unusual between them?"

"No, they were getting along," the server said. "No arguments, they were totally normal."

One bullet went through the man's back, nicked his lung, came out through his chest and below his neck. He was alert enough to give police the cell phone number of the person he believed shot him.

"He just said 'He shot me, he shot me.' He was down on the ground and a customer jumped into action and was like we need towels and apply pressure to the wound," said the server. "We were just worried he was going to come into the bar and start shooting."

Police tracked the phone to the suspect's home on Dale Avenue in Warren. They talked to his mom who said he was in the basement.

When police got down there they found the suspect dead from a self-inflicted gunshot wound.

"It's a neighborhood bar, I still came to work today," the server said. "I don't feel threatened or anything like that. It was just a random incident."

Police aren't sure if the victim was going into the bar when he was shot or if he was outside. They checked on his status late Wednesday afternoon and he's still in critical condition. 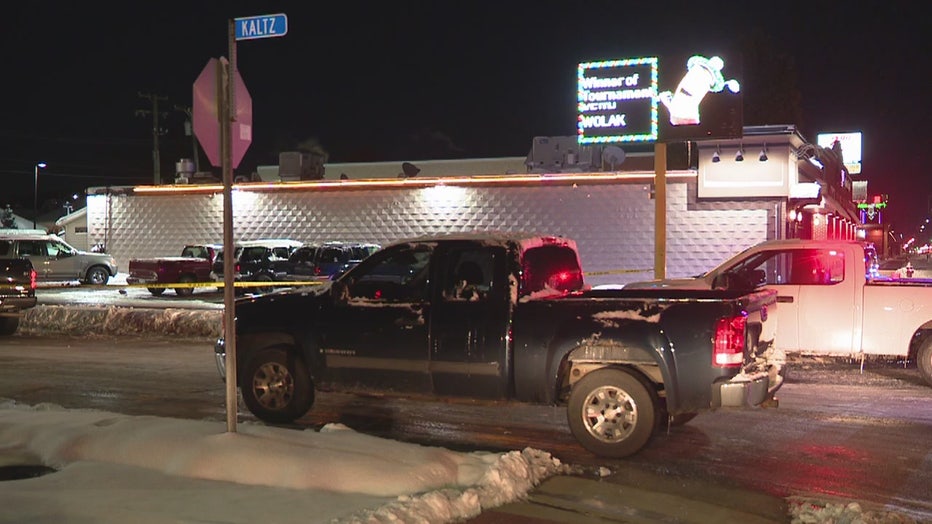