TAYLOR, MI. - A Citgo gas station clerk in Taylor was arrested after firing at a customer, believing the man was driving away without paying for gas.

The incident happened around 10:45 Tuesday morning when a Dearborn man had stopped at the gas station to purchase fuel and cigarettes. The clerk instructed him to pump the gas and then pay after.

"So I just pumped what I needed," he said.

Gas station clerk in custody after shooting at a customer

A gas station clerk is in custody after he allegedly mistook a customer for stealing gas and shot at him while he was in his car. Happening at a Citgo gas station in Taylor, a Dearborn Heights man fled the scene onto I-94 before pulling over after discovering his tire was shredded from a bullet.

Because of the morning's cold temperatures, the man decided to get in his truck and drive to the front of the gas station, and then pay. However, when he drove to the front, he noted the clerk had his hand at his side.

"As I was getting into the truck, I realized the clerk was having his hand on his side, by the gas station door and after I heard the gunshot, I just hit the gas and went onto telegraph," said the victim.

The victim sped onto I-94 but quickly pulled over because his tire had been shredded. He also spotted a bullet hole in the rim of the wheel.

After phoning Triple A and the Taylor Police Department, the clerk was arrested and taken into custody.

"He might have thought I was trying to get away with the gas, I don't know what he's been through, but that still doesn't justify him shooting at me," said the Dearborn man.

Since the incident scenarios keep playing in the victim's head, running through variances of how the event could have gone differently. At least one possibility has him spooked. 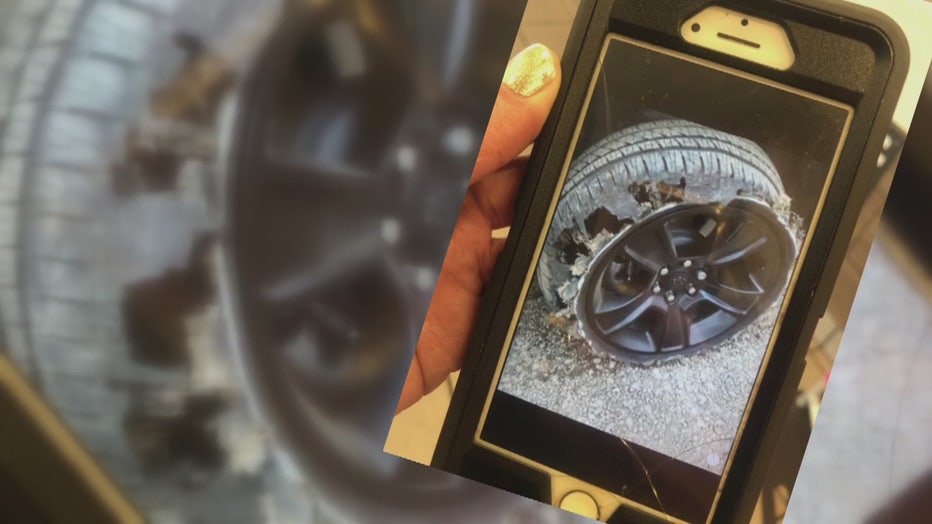 FOX 2 has not been able to confirm if the clerk is still in custody or has been released.

"I'm happy to be alive and I just will never ever stop there again," added the victim.