DETROIT (FOX 2) - A supporter of President Donald Trump spit at a group of counter-protesters after a verbal spat in downtown Detroit. It happened Friday night as crowds from both sides dwindled after a pro-Trump rally outside TCF.

Tense moments outside TCF Center get diffused between protest groups

"People are writing in names in some locations for Joe Biden or regardless, not for Donald Trump," said Alex Meetez.

"What I want to leave people with, was happened at the TCF building was a complete fraud," said Mellissa Carone.

Counter-protesters say they want these Trump supporters to go home.

"Go home and protest the votes in your own counties, in your own space," said Angelo Austin. "Stop coming here because you're mad that the Black turnout was excellent."

Detroit police worked to keep the groups separated but a handful of Trump supporters ended up on the same side as counter-protesters saying they were looking for their friends.

"We’re being threatened we’re being insulted, while we’re trying to do what the police officer told us to do so that we can take orders and leave," said one woman.

There was heightened tension as Joe Biden appears to be nearing victory. The tension that Chris Thompson hopes, turns into unity holding a sign that said 'We're all here together.' 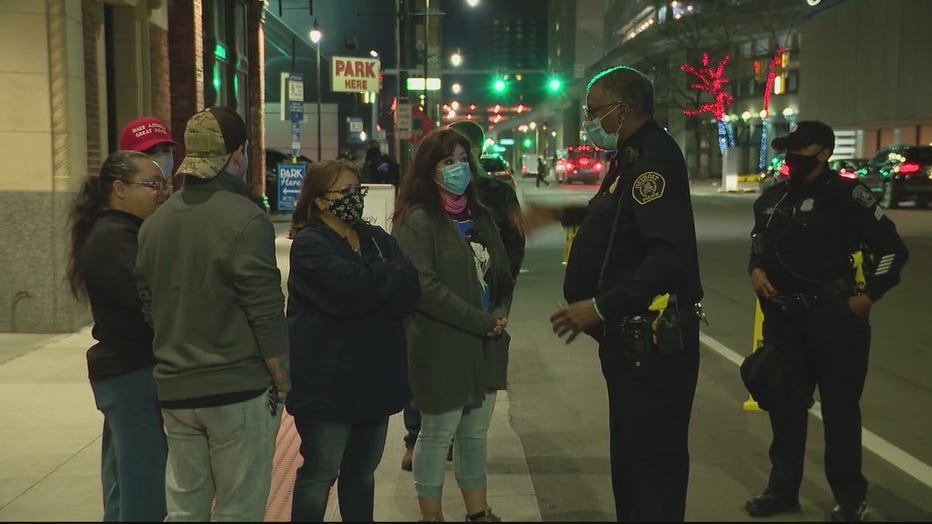 "I am just happy my state is blue, but I still want everybody to know, I still love everybody," he said. "I don't care who you voted for or how you feel - just so we can do this together. We can love each other and we don't need all that crazy stuff."

When a woman inside a pickup truck spat at the counter-demonstrators, a young activist named Stefan Perez held members of the crowd back from escalating the situation. During racial justice protests in Detroit, last spring Perez played a pivotal role in helping keep the peace between those marching and Detroit police.