FERNDALE, Mich. - Every 17 years, the Brood X cicada emerges from its underground dwelling to blanket Northeast and Midwest America, including parts of Michigan.

Every 17 years, the ubiquitous shrill returns as the inch-long bug with orangish-red eyes dig itself out of the ground where it's been feeding on tree sap to search for a mate. 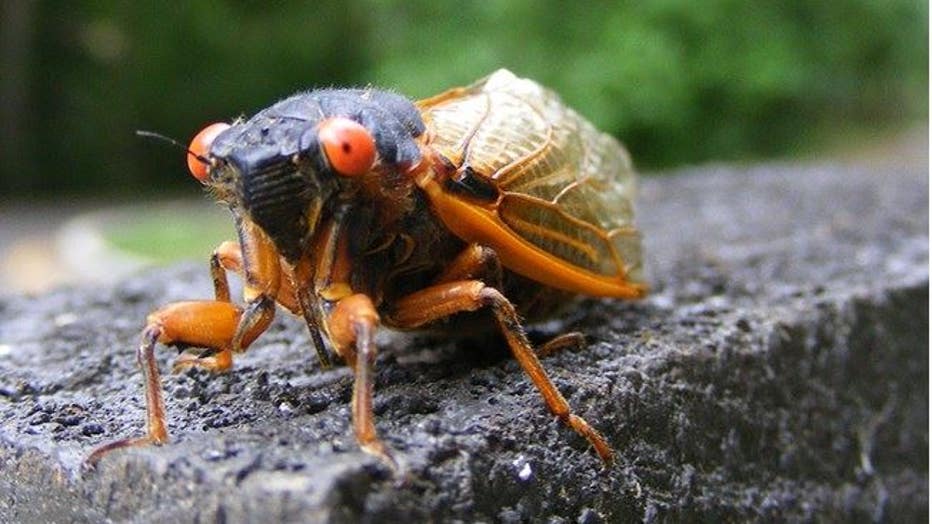 The Brood X Cicada, which emerges every 17 years from the ground. (Courtesy of the National Park Service)

The last time the estimated hundreds of billions of cicadas graced the U.S. with its presence was in 2004. Which means they're expected to return this summer.

Why the cicadas have picked such a curious number of years to lie dormant is still a mystery to scientists - some believing it has to do with avoiding predators or ensuring they don't overlap with other periodical cicadas. But what is guaranteed is around the second week of May is when Michigan can expect to see them.

Here's what to know.

This is not a plague

Scenes of insects covering the skies may be relevant for biblical stories about locusts eating crops, but these cicadas aren't quite so apocalyptic.

They do sprout out of the ground by the hundreds of billions, but they are primarily in search of a mate.

They are known to be harmful to trees because that's where females lay their eggs in the branches. But most of their eating happens before they emerge from the ground and don't target crops.

They don't bite or sting. They aren't toxic to pets in small amounts.

In fact, the arrival of the cicadas is often considered a good thing for the boon of nutrients they bring to the surrounding environment. They're a popular source of food for predators and don't even bother moving if picked up since they rely on their numbers to survive.

Where and when do Brood X cicadas emerge?

Brood X cicadas typically spawn from the ground in Pennsylvania, Indiana, and Virginia, however, their numbers tend to spread from there into neighboring states, including Michigan.

Where there are densely wooded forests, cicadas will likely be there. Michigan doesn't have the large deciduous forests like states south and to the east of it, so their populations tend to not cover Michigan has much. If they do, it's closer to the state's southern boundary.

But if they do, it'll be in May. Experts say the ground temperature has to be around 64 degrees. That's gives us a time frame of late spring when they'll start to emerge in Michigan.

According to Cicada Mania, a website that tracks the status of the bugs, they have already started hatching in Tennessee.

What is their life cycle?

When females lay their eggs, they do so by the hundreds. They prefer tree branches where the eggs will remain for weeks.

When they hatch, they emerge as nymphs, which will fall to the ground where they will burrow themselves.

Here, they will live for 17 years. While encased underground, they will suck the liquids of plant roots and molt their shells several times before surfacing as adults.

We're near the time when this starts. And when it does, it can be loud.

Male cicadas "produce the loudest sounds in the insect world," according to the National Park Service. Scientists have said this is likely a means to warding off predators who don't like the sound.

But to the males, this a tune produced by an organ in their body they use to call out to females. If a female likes what it hears and indicates a willingness to breed, it will make a clicking sound with its wings.

After successful copulation, the females will lay their eggs and start the process anew.