After all, he is in improv.

"A lot of improv is made up on the spot so it exists for a second and it's gone. But this is something a little more lasting that I can be a part of," said Jacokes.

But as for the other 119 Real Men Wear Pink ambassadors? It may raise a few more eyebrows.

Wondering why men are dressed in all pink this month? The Real Men Wear Pink campaign is in effect

Confused to see men adorning all pink and galavanting around southeast Michigan this October? It's breast cancer awareness month and more than 100 men are showing off their more vibrant sides. It could be a police chief, or maybe a comedian? How about ambassadors at clothing stores? Everyone is turning out to raise tens of thousands of dollars to find a cure to the disease.

"Some people have thought it's a costume but most people know and they'll come right up and thank me for wearing it," said Lake Orion Police Chief Jerry Narsh, "and they recognize it as part of the real man of Orion with Real Men Wear Pink campaign."

The Real Men Wear Pink campaign is an annual event that takes place in October, to raise awareness and a little bit of money to fight breast cancer. And right now, it's in overdrive.

"We're at about $15,000 officially. We have a few thousand where we have to wait for Eventbrite checks but we'll be over 20 grand by the end of the month," said Matt Pheiffer, another ambassador from Orion.

Go 20 miles south to Birmingham, and you'll see businessmen and women adorning themselves in similarly-styled clothes.

"We actually have an event on Thursday night here at Dolce Moda in Birmingham and the owners have graciously allowed us to come in from 5 to 8 and they agreed to donate 10 percent of all proceeds during that time," said Mike Clawson.

The owners are so gracious in fact that they're partaking. 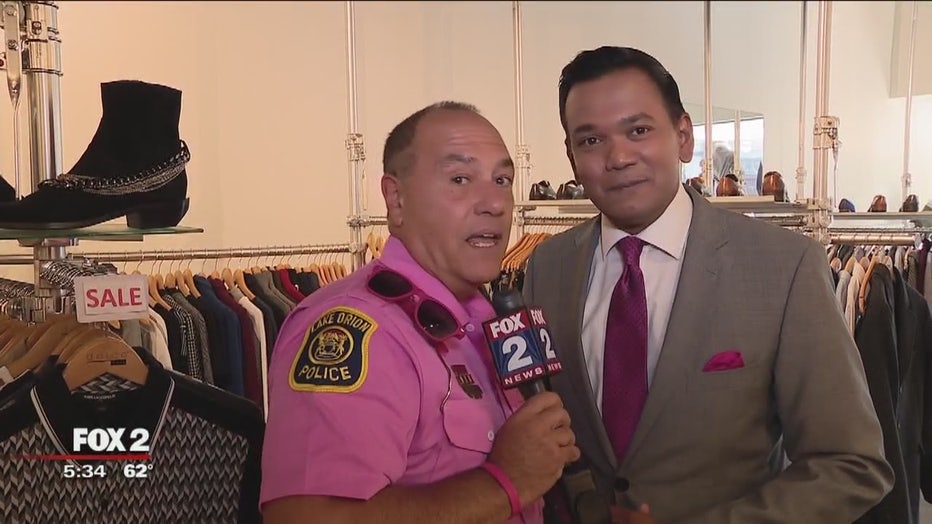 "Well, I'm sure it has touched a lot of people, including myself. I have lost friends, family members, and survivors now that are happy, so we want to give back," said Jenny Ouliguian of Dolce Moda.