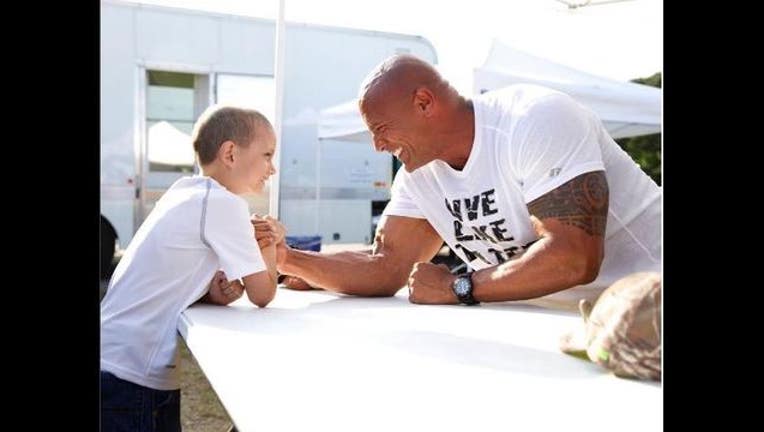 Dwayne "The Rock" Johnson made a young boy's dream come true when he invited the seven-year-old boy who has fought cancer for four years on to the Baywatch set.

The Rock has never been one to shy away from helping people (just check his Instagram - he's always visiting and helping children) but this one is slightly different.

Back in February, Children's Hospital at Erlanger in Chattanooga, Tennessee, posted a picture collage of Gabriel, aka "Tater", asking for others to help him meet The Rock. Tater wrote a long letter to The Rock on two large poster boards and the hospital shared it, in hopes of making his dreams come true.

Tater wrote that he has been in cancer treatment for over four years, he's been stuck by hundreds of needles, had tons of shots, been through 8 surgeries, and so much more. All he wanted to do was meet his inspiriation: Dwayne "The Rock" Johnson

Last week, it happened. The Rock invited Tater to the set of Baywatch to watch him film scenes and hang out when the cameras weren't rolling.

But it wasn't all fun in games. The Rock took on Tater in an arm wrestling competition. Which, once again, The Rock lost:

Perhaps the best moment of all was the video The Rock posted on Instagram. The team created Tater his own Baywatch movie poster and The Rock got to surprise the young boy with it. He told Tater how inspired he was by his fight and suddenly, the 6'5" WWE-turned-action star had to pause.

He was choked up. The Rock shook it off and then showed the boy what they made for him. Check it out for yourself: