DEARBORN HEIGHTS, Mich. - When Brad McClellan gets 500 subscribers on his YouTube page, his dad said he’ll take him to Philadelphia so they can “climb the Rocky stairs.”

And once he gets to 1,000 subscribers, he’ll take a trip to Las Vegas.

It’s likely he’ll achieve those digital benchmarks; the 7-year-old already has 272 people following his ‘Brad Of All Trades’ page. But before he surpasses his goals, he has another job to do.

Resting in front of him is a breadstick and cheese snack. His eyes light up and a grin stretches across his face, revealing several missing teeth.

“I am so lucky because there is my favorite snack right there,” he says, grabbing and sticking it in his sweatshirt pocket. “Cheese is my favorite food in the whole world.”

He also likes the breadsticks because when dipped in the cheese “those combined are my favorite food in the whole world.”

Brad’s favorite snack isn’t the only thing on the table, however. The kitchen table in his Dearborn Heights home also has piles of crackers and Cheez-Its and granola bars, hygiene utensils like deodorant and toothbrushes, and an array of gloves and hats. Over on the couch are several sleeping bags.

Mandated by some innate force of pure good, Brad plans to divide up the supplies into drawstring bags and drive around Detroit looking for people in need to donate the supplies to. Ask Brad why he’s dedicating his Thursday night to this game of charity, and his answer is a brief one.

“I just wanted to be kind.” 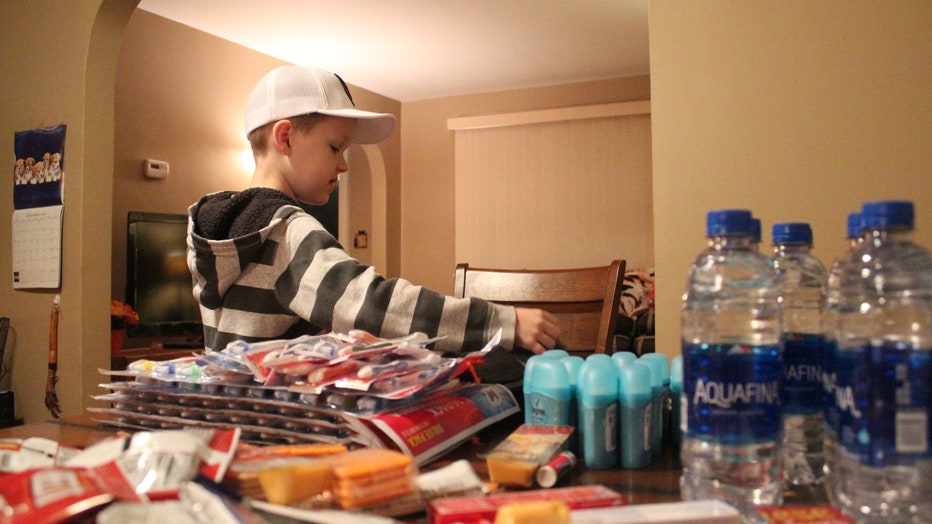 Brad got the idea to acquire hundreds of snacks and supplies and give them away a few years ago when he was 5-years-old. Then again, the productive kid has always acted on ambitious ideas - ideas his parents have always fostered.

“Brad likes to watch YouTubers, he likes to watch games, so when he came and said when he grew up, he wanted to be a famous YouTuber, I said ‘why wait? Let’s do it now,’” said his dad Kenny.

On May 19, 2018, Brad of Trades was born. It features dozens of interviews with celebrities and former WWE wrestlers, ‘Brad’ hacks, and card-opening sessions. Absent from the page, however, is any semblance of his philanthropic ambitions, a hobby the family decided was best left separate. He wasn’t donating the supplies for the benefit of a brand - but just “to be kind.”

“So, I give homeless people this stuff. So I give them socks, hat, gloves, toothbrushes, Cheez-Its, cheese and crackers, crackers, and water, and deodorant and all that stuff,” he said.

So every year, a couple weeks before Thanksgiving, the family starts taking donations from friends and relatives, as well as making trips to the Dollar General. After purchasing sleeping bags, the family puts together around 10 ‘comfort packs’ and drive around Detroit, passing them out to people in need.

For all the charitable maturity that Brad exhibits during the end of November, he admits his inner stardom does have at least one selfish desire.

“I’m so excited. This is probably going to be definitely my favorite day ever,” he said. “Because I really like getting on the news.”