How can landing a punch help slow the progression of Parkinson's? Turns out, boxing appears to help fight this disease in many ways.

Inside an Atlanta area YMCA is a room packed with fighters. Every one of them is serious about boxing - and has also been diagnosed with Parkinson's disease.

For Tim Nantz, a 74-year-old telecommunications consultant, it started with a trembling in his hand.

But as Parkinson's progresses it causes stiffness, gait problems, difficulty balancing and falls. And, Nantz, married 52 years, has had to give up things he used to enjoy.

Working on your balance and your memory, trainers are using boxing as a medium for staving off the symptoms of Parkinson's. And it appears to be working

"Yes, I used to do woodworking. I would not get near a saw today. That would be too dangerous. I used to do most of the work around our house, for repairs. Now I either have to call someone to do it sometimes or my wife has learned to change some light switches," Nantz says.

There's no cure for Parkinson's but everyone here believes exercise and non-contact boxing, in particular, may be able to slow the disease down.

"It works on your balance because you're moving from foot to foot," Nantz says. "It works on your memory as you remember the punches, like a one or a two or a five, in a sequence that you've got to do."

The Forsyth County Y launched this class back in September with a grant from the Parkinson's Foundation.

"So, a lot of the time with Parkinson's, you'll see gait issues. Folks tend to hunch their shoulders," explains Jennifer Rewkowski, the director of program management for the YMCA of Atlanta. "There is agility work, there is hand-eye coordination, there's a lot of vocal work that goes into the boxing."

And yelling is encouraged.

"Because one of the things Parkinson's does is it affects our speech. We tend to get softer. My wife says, 'speak up,'" says Nantz. "You can yell at that bag and get angry with it and pretends it's Parkinson's. It makes you feel better."

With this shared focus and unspoken understanding, boxing seems to be helping. 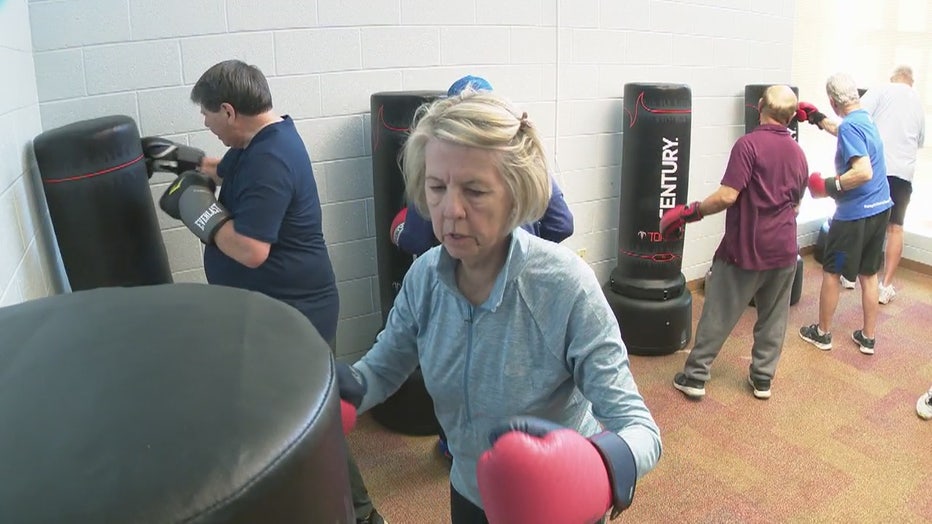 "We've had participants that come into our classes in wheelchairs, or with walkers, and they leave the class being able to walk," says Rewkowski. "So, seeing something like that, it's just really motivational."

"I feel good. I've got a little tremor now, but that's nervousness from the camera," Nantz says.

And boxing has made Nantz a believer.

If boxing is not your thing, there are many other types of exercise that may help such as biking, running, pilates, dance or tai chi.

If you want to find a boxing class somewhere in metro Detroit, check out rocksteadyboxing.org.