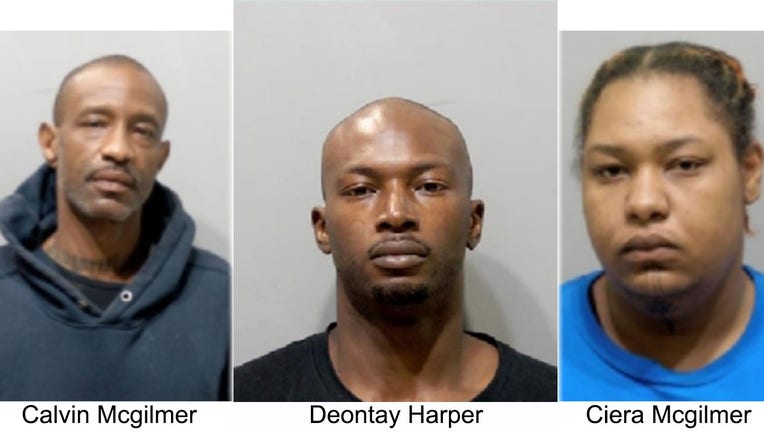 Deontay Harper (center) is charged with killing Syraya Lee. Calivin Mcgilmer (left) and Ciera Mcgilmerboth charged with tampering with evidence and more after the woman's body was found inside of her car that was set on fire.

DETROIT (FOX 2) - The Wayne County Prosecutor's Office announced late last week that three people had been charged with killing a 35-year-old Detroit woman by strangling her, putting her car in the trunk of her own car, and then setting it on fire.

Deontay Harper, 27, Ciera Mcgilmer, 28, and Calvin Mcgilmer, 46, were all charged with the murder of Syraya Lee on May 15.

According to prosecutor Kym Worthy, Harper strangled Lee to death at a home on Moenart Street in Detroit which is on the north side of the city near Mound Road and Outer Drive East. After she died, Worthy said all three then loaded her body into the trunk of her car and drove more than 7 miles to Lakepointe, which is near Outer Drive East and I-94.

That's where officials said they set the car on fire with Lee's body inside.

Herper and Ciera Mcgilmer were arrested two days later. Caliv Mcgilmer was arrested the day after.

Harper and Calvin are both being held without bond. Ciera was given a $50,000 personal bond. They are all due back in court on June 3.