"The vast majority of weapons that we take off the streets are handguns and a very large percentage of them are stolen and illegally possessed," said Oakland County Sheriff Mike Bouchard.

If anyone knows anything about America's gun problem - it's cops. The men and women sworn to protect and serve.

“I think if you want to end violent crime, we have to focus on criminals,” said Craig.

And these lawmen believe that's where the conversation on gun violence should begin.

Not on mass shootings which according to Pew Research Center account for a small fraction of all gun murders that occur every year and not on banning so-called assault weapons which, according to the FBI, accounted for nearly three percent of murders by guns between 2014 and 2018.

Red flag laws could address the latter end of that two-fold problem. The current proposal in Lansing would allow for police to temporarily seize someone's weapons if a judge determines they are a threat to the public or themselves.

But many gun owners here in Michigan have not warmed up to the idea and for three years Republicans in Lansing have stalled efforts to move it forward.

“I've always been the kind of person that if you see something coming, don't just say I'm opposed to it,” Bouchard said. “Say if that were to happen, how do I make it better?”

It's found an unlikely champion in Sheriff Bouchard.

“Initially most people that believe in gun rights, their first reaction is red flag laws are a problem,” he said. “But I looked at it as, if a red flag law is going to be introduced, how can we put in due process?”

But what about other pro-gun control measures that Democrats and activist groups like Moms Demand Action are pushing for?

FOX 2: “Would those have a real effect on gun violence and gun crime?”

“No,” Craig said. “If you want to make a difference in reducing gun crime, focus on criminals. If you focus on the criminals and they know those who will continue to carry weapons illegally, and they know there's a certainty that they're going to be prosecuted and jailed, then you'll see change.”

But according to Craig, that is not a given in Wayne County, saying at times judges and prosecutors let criminals off easy.

“We understand that most of the people involved in violent crime, it wasn't the first time,” Craig said. “Here we got some kind of plea deal on attempt CCW where okay, you have one other gun crime and you haven't been in trouble in six months so we going to plea it down to attempt CCW. What is an attempt CCW? Either you were CCW carrying a concealed weapon or you weren't. And then you got the judges who will dismiss the case.”

“The first draft of the First Step Act in Washington actually said if unless you had more than three gun crimes convictions, where you were carrying a gun illegally, you were still eligible for an early release program,” Bouchard said. “Three times you could be carrying a gun before it mattered on early release. That's a disconnect between their rhetoric on guns when they're letting gun criminals out early.”

Chief Craig says his officers are doing their part in combating gun violence - from making arrests to taking guns off the street - more than 3,600 in 2019.

FOX 2 got a look at just a few of the firearms recovered over the years: AK-47s and AR-15s, MAC-10s with suppressors to handguns of every sort and caliber.

While there's no silver bullet when it comes to reducing gun violence, Chief Craig is convinced even those who disagree can go further together.

“We need to sit down at the table, both sides, have law enforcement, courts, prosecutors, cross section of our community and let's carve out what would work,” Craig said.

“Some on one side say we don't want to do anything,” Bouchard said. “And some on the other side are disconnected on the reform stuff and letting people out that already have a record of gun crimes. So what is in the middle. The meat of the problem. the heart of the problem and it is the criminal, and the person that's off the rails tragically, that needs to be addressed.

“And that will address the vast majority of what we see every day.” 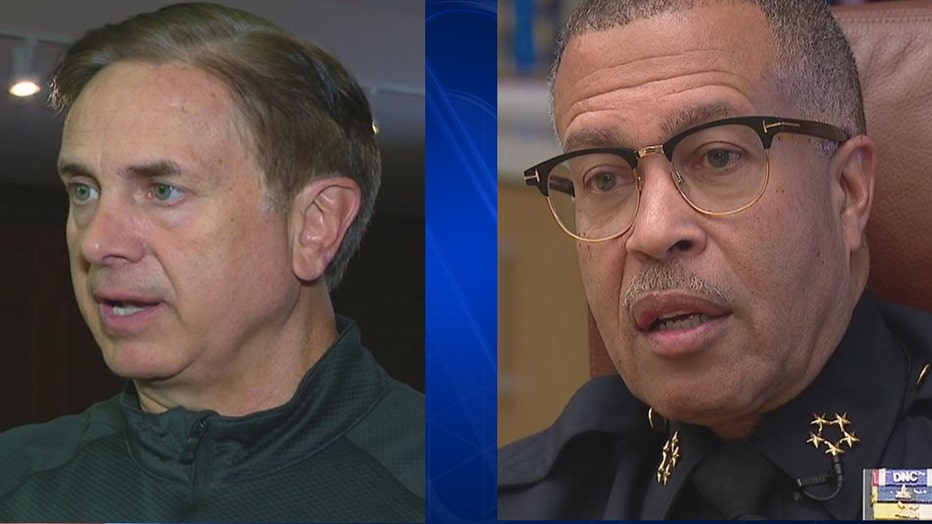 “Reasonable minds can disagree and I could not disagree more with the chief on this. I feel strongly that universal background checks, bans on high capacity weapons, permanent assault weapons ban and other reasonable measures would have a significant effect on crime and gun violence.

“We are the most violent country in the world and these measures would be a good start. All one has to do is look at the recent and not so recent mass shooting events. But even as we focus on the horror of mass and school shootings, we must never lose focus on gun violence in urban areas every minute of every day. One young life lost is one too many.”