Train headed to Detroit derails in Warren, could take days to clear

A train was on its way to Detroit on Thursday morning when it derailed in Warren. People are asked to avoid the area of Schoenherr and Stephens for the cleanup, which could take days.

WARREN, Mich. (FOX 2) - A train derailment in Warren could cause traffic delays for several days after 16 cars left the tracks in the area of 10 Mile and Groesbeck.

A train carrying approximately 151 cars came to a standstill, blocking local roads in Warren and sparking concerns that a possible hazmat situation could escalate due to multiple tankers being derailed.

Drone footage of the Warren train derailment shows several train cars off the track. No injuries were reported.

"This is the largest derailment in recent memory since I've been mayor. We haven't had anything like this in years, if not decades," he said.

The derailment happened around 7:30 a.m. when fire and police department crews were dispatched to Schoenherr and Stephens. It's unclear what caused the derailment, but officials have confirmed no injuries occurred.

Fire Commissioner Wilburt McAdams said the three tankers carrying a liquid substance had unrefined alcohol and chlorine in them. Only one tanker was leaking but it wasn't a danger to the public, McAdams said.

Heavy duty equipment will be cleaning up the crash scene with a goal of clearing the scene by Friday afternoon.

"Three of them are what we call tanker cars carrying products, including the base for an alcohol, as well as liquid chlorine," he said. "Those three cars are upright. The one car carrying the liquid alcohol base is leaking a little." 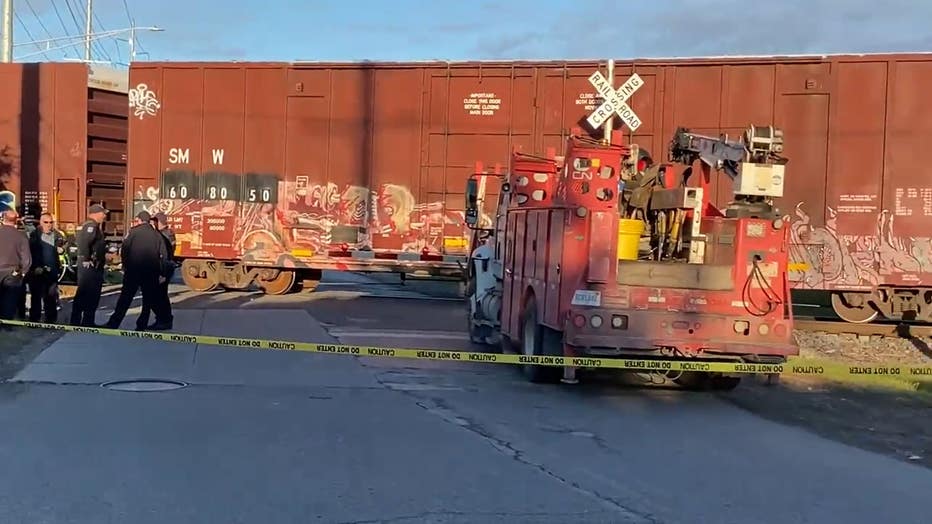 He said there is no danger to the public.

Drone footage over the derailment showed several train cars off the track in a tree-covered area of the railway.

Officials asked that drivers avoid the area entirely as it could take days to clear the incident. They included:

The derailment is still under investigation.