FOX 2 - President Donald Trump is vowing to ask the Supreme Court to weigh in on the inconclusive election. The Associated Press has not declared a winner in the presidential race.

Trump appeared before supporters at the White House early Wednesday morning and cried foul over the election results, calling the process “a major fraud on our nation.” But there’s no evidence of foul play. 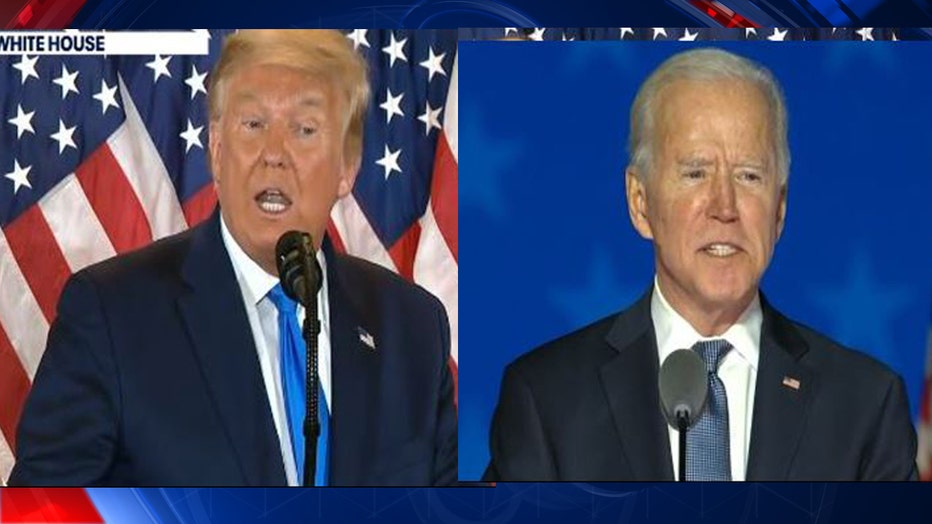 The night ended with hundreds of thousands of votes still to be counted, and the outcome still unclear in key states he needs if he is to win against Democrat Joe Biden.

Biden held a 238 to 213 Electoral Vote lead on Trump heading into the late overnight hours with critical states still uncounted and up for grabs.

Trump launched a defiant tone at a 2 a.m. address to his supporters saying that he believed his side has already won.

"I want to thank the American people for their tremendous support," he said. "A very sad group of people is trying to disenfranchise that group of people and we won't stand for it.

"We were getting ready to have a big party, we were winning everything and then it got called off."

Trump then said that the US Supreme Court would likely be involved.

"We were winning this election and quite frankly we won this election," he said. "We will be going to the US Supreme Court. We don't want them finding any ballots. We will win this and as far as I am concerned, we already did win it."

Biden addressed his supporters in Delaware thanking them for their patience.

"We believe we are on track to win this election. It ain't over until every vote is counted," he said. "We are feeling good about where we are. It's not my place or Donald Trump's place to say who won the election.

"I want to thank every one of you. Keep the faith guys, we are going to win this."