A lone police officer diverted a group of protesters away from the Senate floor as pro-Trump demonstrators breached the Capitol building on Jan. 6 (Credit: Igor Bobic/ HuffPost via Storyful)

WASHINGTON - Security is being increased at Washington, D.C.-area airports following last week's deadly siege of the U.S. Capitol by a pro-Trump mob and ahead of President-elect Joe Biden's inauguration. The Transportation Security Administration said it remains on high alert nationwide.

"We have deployed technologies that enhance security screening and aid in the detection of prohibited items," TSA said in a statement.

The heightened security comes as the FBI issued a bulletin warning of plans for armed protests at all 50 state capitols and in Washington ahead of Biden's inauguration. TSA said it will it will maintain enhanced safety measures at the three local airports, and travelers can "expect to see enhanced security presence with other transportation modes." 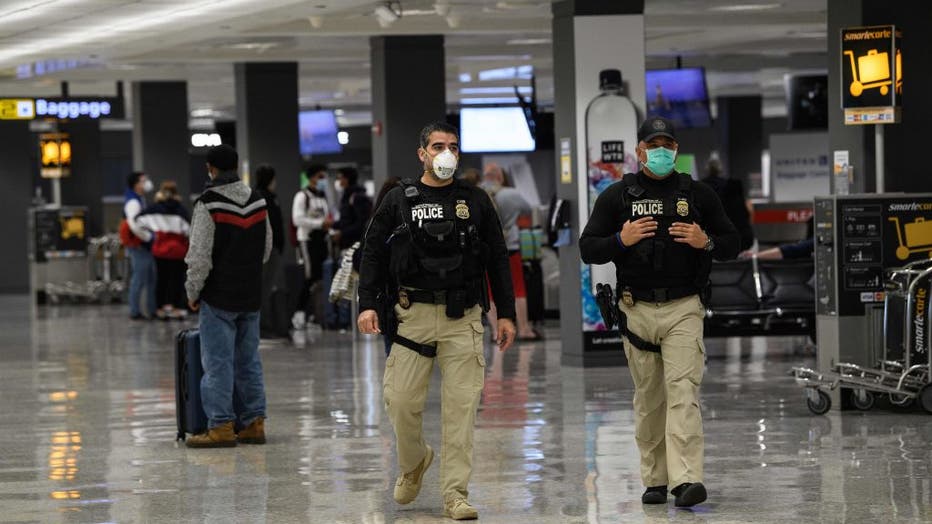 "TSA prepares for all contingencies, and employs multiple layers of security that are both seen and unseen. TSA officers continue to remain vigilant and focused on their transportation security mission, ensuring that travelers are not carrying prohibited items, and Federal Air Marshals continue to ensure the safety and security of passengers, crew members and aircraft throughout the transportation network," TSA’s statement adds.

Senate Democratic Leader Chuck Schumer on Tuesday called on the FBI to add anyone identified breaching the Capitol during last week’s violent riot to the federal no-fly list.

In a letter to FBI Director Christopher Wray, Schumer said the attack on the Capitol as Congress was voting to affirm Biden’s win was "domestic terrorism." He said those who stormed the Capitol should qualify as "insurrectionists for the No-Fly List."

The federal no-fly list is part of the U.S. government’s Terrorist Screening Database and prohibits anyone who "may pose a threat to civil aviation or national security" from boarding a commercial aircraft. Generally, in order to be placed on the list, the government must have information that the person presents "a threat of committing terrorism" to the aircraft or the U.S. homeland or U.S. facilities.

"Unruly behavior on an airplane may violate federal law. You could face jail time and fines up to $35K. Always follow crew instructions," the FAA tweeted.

Biden will be sworn-in on the same risers in the same spot at the U.S. Capitol where a violent mob of President Donald Trump’s supporters descended Jan. 6. The inauguration is being designated as a "national special security event," which clears the way for communication, funding and preparation between multiple agencies in Washington, like the Capitol Police, Pentagon, Homeland Security and District-area police.

Other such events are the State of the Union, the Super Bowl and the Democratic and Republican National Conventions.

Last week's rally turned violent siege was viewed as a free speech event in the days before, despite multiple warnings about the potential for violence from right-wing extremist groups. Egged on by Trump and his repeated attempts to de-legitimize Biden’s win, the violent mob marched from the White House to the Capitol, where they occupied the building for hours to try to stop lawmakers from certifying Biden's win.

Five people died, including a police officer. Two explosive devices were found, but they did not go off.

"I don’t want to use the expression that we’re comparing apples to oranges," said Michael Plati, U.S. Secret Service special agent in charge, who is leading the inauguration security. But he added that the event is planned over a year with contingencies, and they anticipate the possibility of extreme violence.

Biden himself hasn't expressed concern about his own security at the inauguration.

"I’m not afraid of taking the oath outside," he told reporters Monday. "It is critically important that there’ll be a real serious focus on holding those folks who engaged in sedition and threatening the lives, defacing public property, caused great damage -- that they be held accountable."

Law enforcement officials never go into too much detail about security so would-be attackers aren’t tipped off. But Plati said they've taken into account the siege: "It’s a poignant reminder of what can happen."

And the inauguration will look different from other presidential inaugurations because of last week's riot, with extremely tight security around the entire capital region. At least 10,000 National Guard troops will be in place by Saturday. Some will be obvious: officers in uniforms, checkpoints, metal detectors, fencing. Some won't.

"There's a variety of methods to ensure that we have a secure, seamless, safe environment for our protectees, but most importantly, the general public," Plati said.

Acting U.S. Capitol Police Chief Yogananda Pittman said in a statement Monday that officials have "comprehensive, coordinated plans" in place to ensure safety and security. She said the grounds of the Capitol will be closed to the public. The inauguration is a ticketed event.

The Department of Homeland Security is setting increased inauguration security measures in motion earlier than scheduled, citing an "evolving security landscape" leading up to the event.

Acting DHS Secretary Chad Wolf said Monday, just hours before he announced his resignation, that he’s moved up the timing of the national special security event for Biden’s inauguration to Wednesday, instead of Jan. 19. He cited the "events of the past week," along with an evolving security landscape.

Next week's event was already going to be pared down because of COVID-19; Biden had asked supporters to say home and watch from afar. In keeping with crowd size restrictions to slow the spread of the virus, traditional activities like the parade and the inaugural balls will be virtual.