WASHINGTON - After having his personal Twitter account permanently suspended Friday, President Donald Trump tweeted from the official government @POTUS account four times, ranting against the social media company before the tweets were removed by Twitter.

"As I have been saying for a long time, Twitter has gone further and further in banning free speech, and tonight, Twitter employees have coordinated with the Democrats and the Radical Left in removing my account from their platform, to silence me," Trump tweeted. 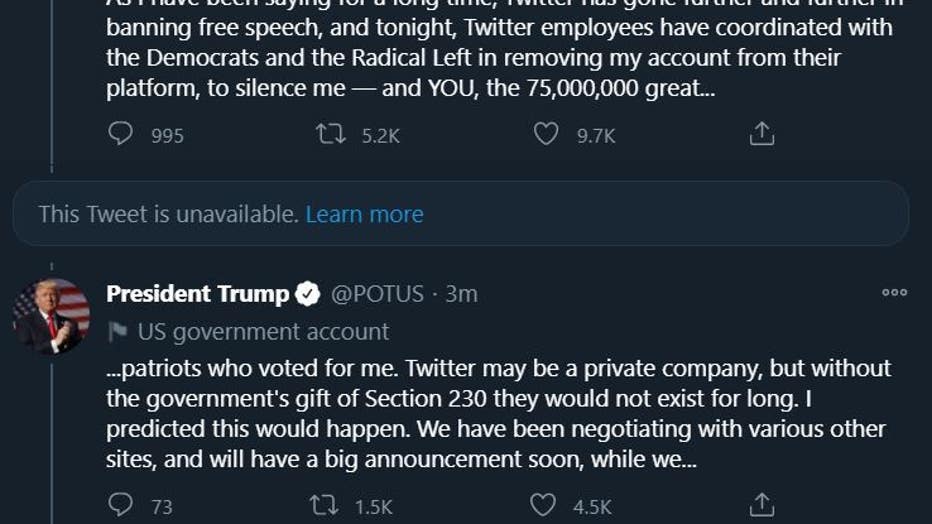 He went on to further rail against the company, and claimed that he has been "negotiating with various other sites and is looking at "the possibilities of building out our own platform in the future."

Minutes after the four tweets were posted, they were apparently removed by Twitter.

"After close review of recent Tweets from the @realDonaldTrump account and the context around them — specifically how they are being received and interpreted on and off Twitter — we have permanently suspended the account due to the risk of further incitement of violence," The social media giant wrote in a statement on Friday.

The statement continues: "In the context of horrific events this week, we made it clear on Wednesday that additional violations of the Twitter Rules would potentially result in this very course of action. Our public interest framework exists to enable the public to hear from elected officials and world leaders directly. It is built on a principle that the people have a right to hold power to account in the open."

According to Twitter’s ban evasion policy, if another account was created by Trump and used for the purposes of evading the permanent ban, it would also be subject to permanent suspension. Government accounts including @POTUS and @WhiteHouse would not be suspended unless absolutely necessary in order to alleviate real-world harm, according to the company.

Pelosi calls for Pence to remove Trump with 25th Amendment

House Speaker Nancy Pelosi has joined Senate Democratic leader Chuck Schumer and a growing chorus of lawmakers calling on President Donald Trump’s Cabinet to remove him from office following Wednesday’s violent assault on the Capitol by the president’s supporters.

In an unprecedented step, Facebook and Twitter had suspended President Donald Trump from posting to their platforms Wednesday following the storming of the U.S. Capitol by a mob of his supporters.

RELATED: Timeline of the pro-Trump riot at the US Capitol: How the chaos unfolded

The temporary suspensions came after Trump released a video on Twitter on Wednesday shortly after 4 p.m. ET, asking protesters to leave the Capitol building, but calling them "very special." In the video, the president maintained his false claims that the 2020 election result was fraudulent. "You have to go home now," the Trump said. "Go home in peace." 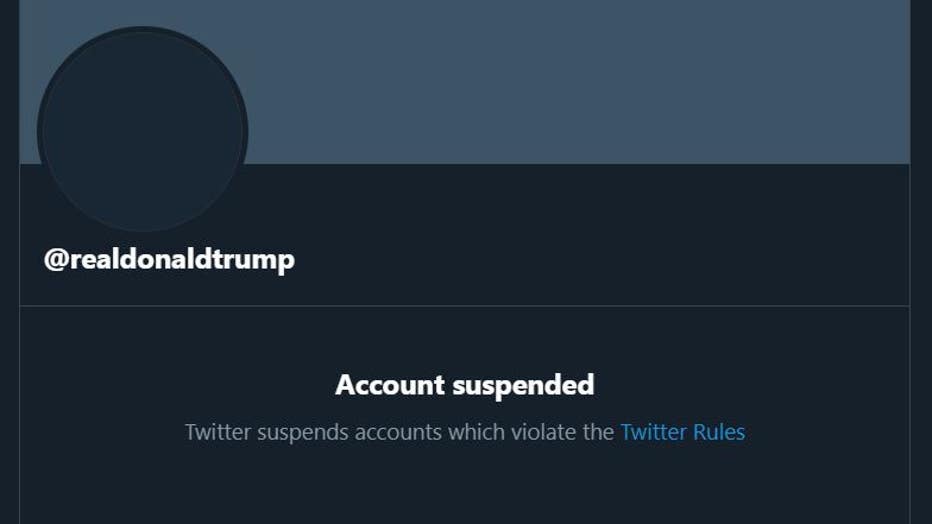 A few hours after posting that video, Trump followed up with another tweet continuing to push unfounded claims of election fraud and appearing to justify the violence at the U.S. Capitol.

"These are the things and events that happen when a sacred landslide election victory is so unceremoniously & viciously stripped away from great patriots who have been badly & unfairly treated for so long," Trump tweeted.

Twitter locked Trump out of his account for 12 hours and said that future violations by Trump could result in a permanent suspension. The company required the removal of three of Trump’s tweets, including the video.

Despite previously calling the protesters "special" in a video that he tweeted amid the riot Wednesday, Trump denounced their actions in a new video posted to Twitter on Thursday, saying the rioters "defiled the seat of American democracy."

"To those who engage in the acts of violence and destruction, you do not represent our country, and to those who broke the law, you will pay," Trump said, promising a peaceful transition of power.

But Twitter said that a tweet the president posted on Friday morning saying that he would not attend President-elect Joe Biden’s Inauguration "is being received by a number of his supporters as further confirmation that the election was not legitimate and is seen as him disavowing his previous claim made via two Tweets by his Deputy Chief of Staff, Dan Scavino, that there would be an ‘orderly transition’ on January 20th."

"As such, our determination is that the two Tweets above are likely to inspire others to replicate the violent acts that took place on January 6, 2021, and that there are multiple indicators that they are being received and understood as encouragement to do so," Twitter wrote.

"Thank you @twitter (https://twitter.com/Twitter) for taking this action. We must come together as a country to heal and find a common path forward," he wrote.

"Big Tech wants to cancel all 75M @realDonaldTrump supporters. If you don’t think they’re coming for you next, you’re wrong," Miller wrote.