(FOX 2) - A high school state football semifinal ended with a culture clash and an ugly confrontation.

Almont is a predominantly white community as is the high school football team while Detroit and Denby's team is predominantly black. Both Denby and Almont were competing to get to Ford Field for the Division Five Championship. What happened after their game is casting a shadow over both teams' otherwise stellar seasons.

Punching, shoving, shouting and hurling racial slurs. Those are some of the allegations arising from the aftermath between the teams at Walled Lake Central last Saturday, as some of the confrontation was shown on video taken by Brandon Folsom with the Port Huron Times Herald.

"From the get-go, the referees shook their head and racial slurs were made about our kids taking a knee," said Denby Coach Deon Godfrey.

Almont Schools Superintendent Dr. William Kalmar says things went downhill after the game as the Denby football team was leaving the field at the same time as the Almont High School band.

"At some point there was a shove," said Kalmar. "A student-athlete from Denby shoved one of our band members."

Police officers and sheriff deputies moved in to separate the team and band members. Denby administrators worked to de-escalate the situation as students are seen attempting to make their way to the stands.

"A group of spectators gathered and began to taunt the Denby student-athletes on the ground," Kalamar said.

"The video is misleading because you see a bunch of kids running," Godfrey said. "That's actually a parent hit one of my players [sic]."

"Anything that happened, it has just taken away from the accomplishments of both teams to get that far," said Maureen Walton, an Almont parent who attended the game.

FOX 2: "You didn't hear any racial slurs or anything?"

"No," she said. "You could go knock around any door around here, anybody, and they would open their door."

Bob Burg, a white assistant football coach at Denby High posted on Facebook that an Almont fan was "throwing the n-word around like candy", adding that a student manager was called the n-word by an officer and saying that Almont parents spit on and pelted students with garbage after the game.

The Oakland County Sheriff's Office is investigating the post-game fracas. They are waiting for video from Walled Lake Central before they decide if they'll recommend criminal charges.

In the meantime, Almont is set to take on Lansing Catholic at Ford Field Saturday at 4:30 p.m.

The Michigan High School Athletic Association is waiting for both Denby and Almont to provide written reports on what happened last Saturday before deciding what action they'll take.

"The school district (DPSCD) is deeply disturbed by the actions witnessed this weekend during the Almont-Denby game. Based upon preliminary findings, ‎it is our understanding that Almont adult spectators were cursing and spitting on our coaches and players after the game while leaving the field. The disrespect toward the city, school, and players continued on social media after the game where Almont fans used numerous racist stereotypes. We look forward to getting to the bottom of what occurred based on factual evidence to determine the district's next steps on how to best support our school and it's administration, coaches, and students." 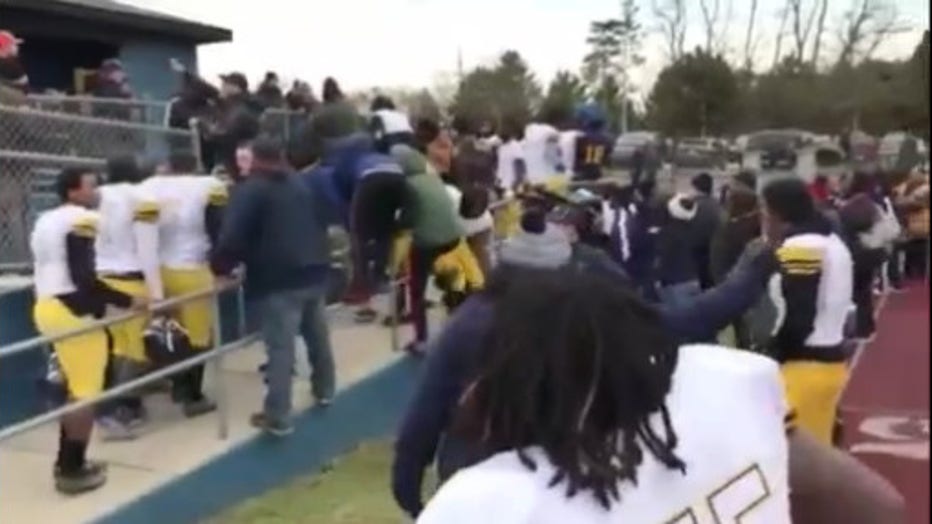