Are you an artist in need of escape? Has the creative circuitry of your brain run awry due to a lack of inspiration? As the urban sprawl of day-to-day life buzzes with productivity, does your brooding psyche yearn for a change of pace away from all the noise?

Hidden deep in the northern Michigan woods lies a rustic cabin built for that kind of salvation. Unfortunately, it's off-limits to every one of the park's visitors, except maybe you.

The Porcupine Mountains Artist-in-Residence Program offers painters, musicians, and writers the opportunity to spend a couple weeks at this isolated piece of paradise buried deep in the 60,000-acre state park. But make no mistake, this is no vacation. And these residents have a job to do once they arrive.

"I always tell them the same thing. It's their job to move around the park as much as they can. Absorb what our park is," said Sherrie McCabe, director of the residency program. "Their job is to interpret that through art. We don't encourage them to work on their art the whole time they are in residence. They need to get into the wilderness to find out what that is - to get a feel for it."

Lasting between two and three weeks long, the lucky few selected to stay at the cabin will have full autonomy to move throughout the park, traversing its trails, breathing in its upper peninsula air, and experiencing everything it has to offer. 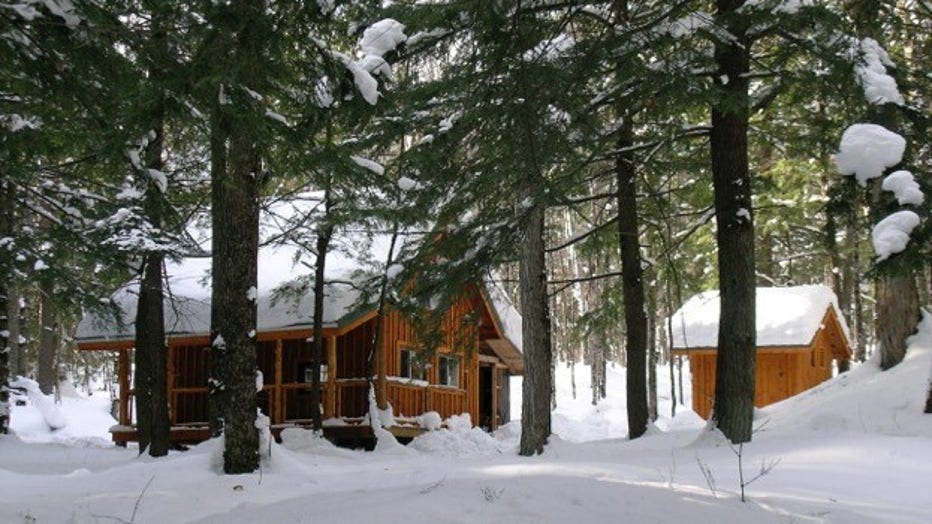 The rustic cabin sits near Little Union River and houses an artist at least two weeks each season of the year.

The effort to discover "it" first began in 1992, when one of the founding members of the Friends of the Porkies committed some of his own time to an artist residency program north of Michigan's upper peninsula on Isle Royale. Pursuing inspiration when he left, Dan Urbanski returned from the island with a little bit of his own. Why not bring some of that same magic to the Porkies?

Urbanski would die before his dream was realized, passing in the late 90's. In the mid-2000s, a former Friends of the Porkies president and a Michigan State research associate with a knack for construction saw that dream to reality. After Steve Stier guided the construction of a timber frame cabin in the summer of 2006, he and Jim Bradley decided to have the incomplete cabin moved to its permanent site. Volunteers sided and roofed the structure in early 2007 in preparation for the first residency.

"On the day I walked the first artist in, my work crew was walking out with their tools," McCabe said. "We actually passed each other on the trail."

That was in July.

Since then, several dozen paintings and photos, poems and anecdotes, and music compositions and video montages have been created. Marrying the senses with the world around them, these residences wrote songs about white pine trees and Presque Isle, canvassed the iridescent oranges and cool blues of Lake Superior sunsets. and captured rock cairns floating in air. 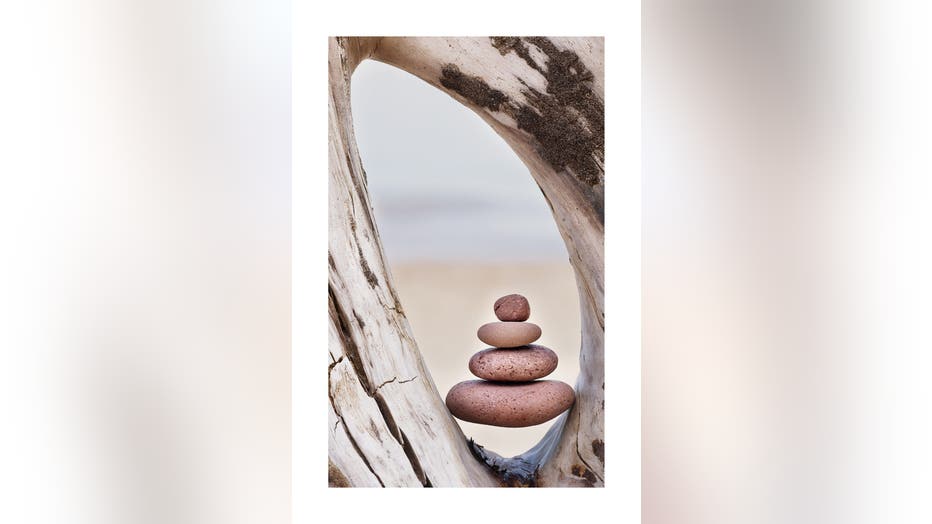 "We've had 80 residents attend the program in the 13 years we've had it. The pieces are spectacular. The range and technique and medium, it's a huge range," McCabe said. "It's each artist's own interpretation of what they're hearing or seeing or feeling or experiencing."

"Their experiences are all different and stilts the artwork," she added.

Regardless of an individual's artistry skill, any that apply will benefit from some experience in the wilderness. For summer residencies, it's only a half-mile walk to the cabin from the parking lot. But in the winter, it's a three-mile hike due to road closures. The elevation changes on the parks many trails can be deceptively extreme, and there's no guarantee the weather will cooperate - in fact, count on it not cooperating. 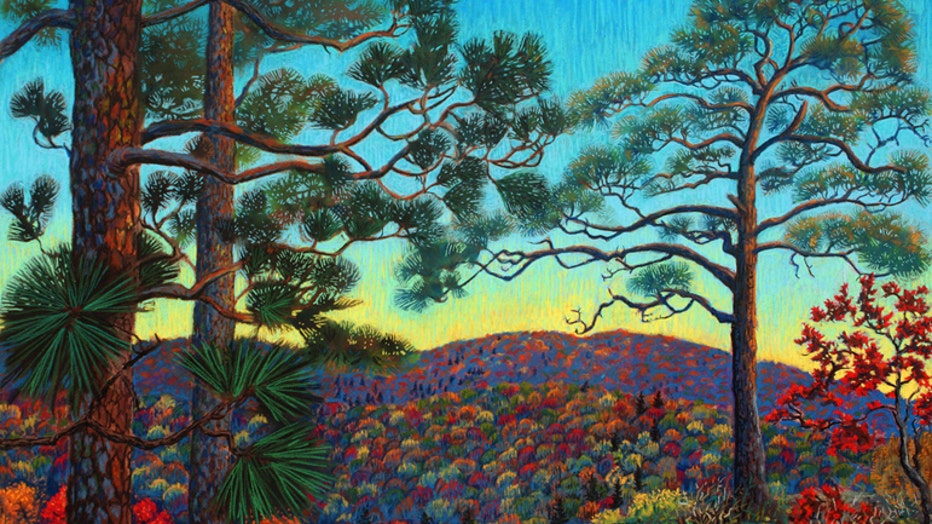 "Dusk on the Escarpment" (Stephanie Berry)

"They have to be willing to accept some things of the wilderness. Pesky flies in the summertime - uncontrollable weather," McCabe said. "One day, I remember watching the thermometer drop 33 degrees. Having that in a two or three-week residency, it can go from one extreme to the other."

But for those up to the challenge, they'll have to bring their food and a sleeping bag. A nearby creek offers a fresh source of water for those with a filter. As for the cabin, its amenities are few. There's a wood-burning stove for heat, a gas stove for cooking, and a fire ring outside. 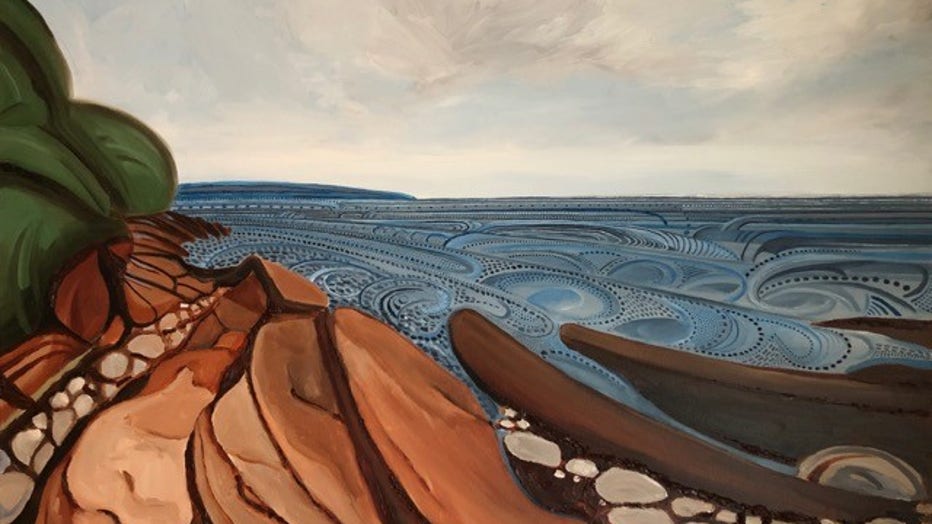 In a normal year, between 30 to 50 applications are submitted. Once the program is completed, residents will have a year to create and contribute a piece of art.

"Generally speaking, people interested are looking for something new. People are trying to get back in touch with nature - trying to find peace and solitude," McCabe said. "That has a big effect on inspiration. The program lends itself very well to that idea."

If you'd like to apply for the program, you can learn more at Porkies.org/Artist-in-Residence.