Women's rights attorney Gloria Allred speaks to LiveNOW after the U.S. Supreme Court voted to overturn Roe v. Wade, the 1973 decision that had provided a constitutional right to abortion.

After the U.S. Supreme Court revoked the federal right to an abortion that's been in place for half a century, companies like Amazon, Disney, Apple and JP Morgan pledged to cover travel costs for employees who live in states where the procedure is now illegal so they can terminate pregnancies.

But the companies gave scant or no details on how they will do this and it's not clear if they will be able to — legally — while protecting employees' privacy and keeping them safe from prosecution.

"Most employers were not prepared for Roe to be overturned, and even those that were didn’t realize the law would literally be changed the next minute," said Brian Kropp, a vice president at the consulting firm Gartner. "They’re trying to play catch-up."

Kropp said many companies announced plans to offer travel benefits without the infrastructure in place to make them work. Some, he added, are creating supplementary policies that employees can buy to cover abortion travel, while others are contacting insurers to see if travel can be added to their current plans. Others are trying to figure out how to offer a benefit without breaching employees’ privacy. 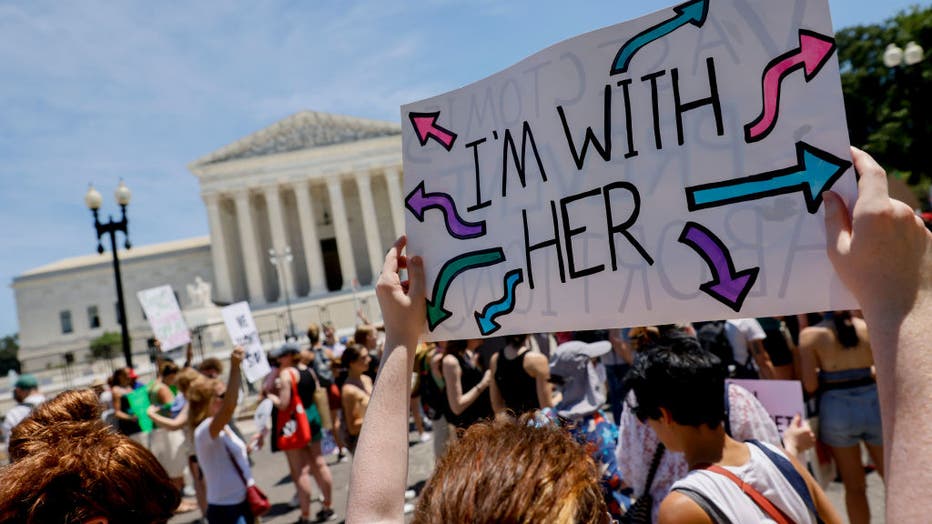 Abortion rights demonstrators during an "Abortion is Freedom" rally outside the US Supreme Court in Washington, D.C., US, on Monday, July 4, 2022. Photographer: Ting Shen/Bloomberg via Getty Images

The answer is no — but they would likely have to tell human resources or a similar department that they are pregnant and want to get an abortion, said Sharona Hoffman, a health law professor at Case Western Reserve University. The company or its health insurer would then provide money upfront or a reimbursement after the fact.

Hoffman called the travel cost pledges a "generous benefit" from companies, and said she would not be surprised "if this becomes a practice that more companies undertake — just without trumpeting it," for fear of the backlash that can come with public statements on a divisive issue such as abortion.

"It’s not necessarily altruistic," she said. "It also makes some sense for companies to not have a bunch of employees that are highly distressed because they have unwanted pregnancies and have to carry the child to term."

For now, most big companies offering an abortion travel benefit will likely add it to existing health care plans, said Jonathan Zimmerman, a partner with the law firm Morgan Lewis who helps companies develop and maintain their benefits.

Big companies are generally self-insured, which means they pay for all claims and have more flexibility to decide what the plans will cover. A third party then processes the claims on their behalf.

That’s the case at outdoor clothing company Patagonia, which updated its health coverage last fall to add travel costs for employees after Texas’s law banning most abortions went into effect. Patagonia said abortion and travel costs are administered in the same manner as other medical services, ensuring confidentiality for employees.

Following the Supreme Court's ruling to overturn Roe v. Wade, there was a huge spike in interest in vasectomies both in online searches and doctor consultations.

Restaurant review company Yelp said its abortion travel benefit is also administered by its health insurance provider. Yelp has told its employees that if they do use the travel benefit, Yelp will not have access to the details of the service.

Microsoft, meanwhile, noted that it already covers abortion, as well as gender-affirming care, for its employees and has now extended the coverage to include travel expenses for "these and other lawful medical services" if they are not available in an employee's home state.

Smaller companies may have fewer options. They typically buy health insurance for their employees from insurers that are subject to state regulations. Those companies have less flexibility to design benefits, and they may operate in states that ban abortion.

Dr. Ami Parekh, chief health officer at Included Health, which offers health care navigation services and virtual care for employers, said it is "quite a scramble" right now for large employers to navigate this fast-moving landscape.

"They’re moving as fast as they can," Parekh said. "And I bet you they’re going to be nimble and change as needed as things come up."

For instance, some companies are offering to pay for a partner to travel with the person getting the abortion.

With the legal landscape shifting quickly, even adding travel benefits to a current medical plan carries some risk. In May, 14 state lawmakers in Texas sent a letter to Lyft warning the company to rescind its abortion travel benefit, saying they plan to introduce legislation that would ban companies from doing business in Texas if they pay for abortions or reimburse abortion-related expenses.

That said, no such legislation has been enacted as of now in Texas or anywhere else. It is also not against the law to travel to states where abortion is legal, Hoffman noted. There are efforts afoot, however, to change that.

And while the federal Health Insurance Portability and Accountability Act, or HIPAA, protects sensitive patient information, it can be overruled in cases where a crime has been committed. That’s the case now in states where abortion has become a crime.

"It’s challenging for employers to navigate what is a rapidly evolving legal landscape," said Sharon Masling, the head of Morgan Lewis’s reproductive rights task force. "There’s going to be a lot of litigation over the next few years."

Rep. Mary Miller made the remarks while introducing former President Donald Trump at a rally in Illinois.

Beyond the legal questions, abortion travel benefits also present some thorny workplace issues, Kropp said. Employees who don’t support abortion may be angry that their company is paying for other employees’ travel, for example. Even those who do support abortion may question why the company isn’t paying them to travel for fertility treatments or transgender health care, he said.

This is why it's likely, experts say that some companies are offering travel benefits but aren't making public announcements about it.

"My sense is most employers are trying to very quickly figure out what’s best for their employees and dependents," Parekh said. "And not all employers want to spend the energy to be very public about that at this moment in time."