(FOX 2) - On that frigid January day, Michigan Gov. Gretchen Whitmer was sworn in -- not knowing that before the ink was dry on the document, she would have to confront her first leadership test where lives were at risk.

It was in the midst of a historic winter cold blast just a few weeks later on January 30 that sent temperatures to the wind chill factor of 40 below zero. Whitmer was told of a fire at a Consumer's Energy pumping plant in Macomb County.

Gov. Gretchen Whitmer sat down with TIm Skubick and talked about some of the issues and emergencies she handled in her first year in office.

While the fire burned above the ground, below was 64 percent of the utility's national gas supply for 4.1 million customers. The governor was shocked to discover they couldn't get the gas out of the ground.

RELATED: Before she was governor, Gretchen Whitmer was a rebellious teen from Grand Rapids

"We asked the Public Service Commission to look into ensuring that we have redundancy in our provisioning systems," Whitmer said.

The new governor and the utility asked customers to dial down to 65 degrees and some did. She knew this was a life or death situation unfolding right in front of her.

"It would have been a horrible tragedy. We probably would've lost lives if that system had gone down," she said.

The Flint water crisis was not an immediate life or death threat when Whitmer took office, but now her name is on the lawsuits as the victims seek financial damages from the stage.

"I think that we've made some progress, but there are a lot of parties involved. There are a lot of things that I can't control in this process and so to predict how quickly it comes to a close - I'm not in a position to do that," she said.

But if there is a settlement, the state government will be hit with millions of dollars in damage costs. When the governor's administration decided to shift 50% of the medical pot supply into the first time adult recreational market last December 1, it was to meet the huge demand there. But the medical pot industry was not pleased and it argues their 185,000 customers could run out of their pot within two months.

"Certainly some advocates for patients are concerned, and I share that concern," Whitmer said.

She said moving up the start date was the right thing to do. 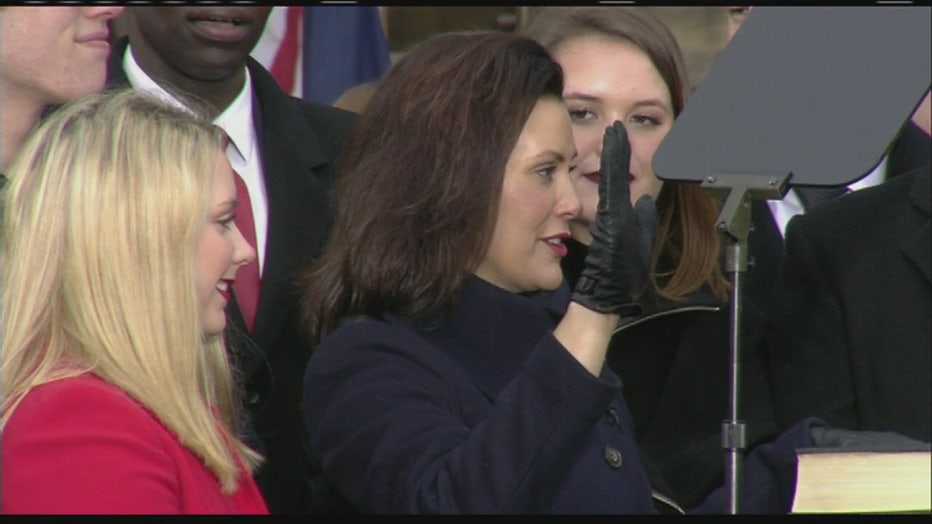 On the political presidential front, the governor has steadfastly stayed out of the debate over President Donald Trump's conduct. During his recent visit to Battle Creek, that changed when Trump hinted that late Congressman John Dingell might be in Hell.

"I was disgusted. It was incredibly cruel to attack a war hero who served our state and our country with such dignity and to do that to Debbie Dingell, it really, it makes me very sad," Whitmer said.